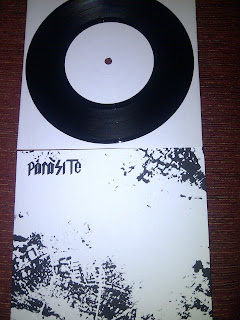 I got this release a couple of years ago when Holy terror put it out-at the time I was loving Parasite but not feeling Wemapyre at all. Nothing's actually changed on that front although I haven't heard this for a while. Also when this came out I had the chance to pick up a test press but at $99 I thought it was a bit steep even though I don't normally mind paying a bit for test pressings off small labels (as it helps keeping them afloat) but I'm glad I hung fire and got this considerably cheaper. I like the look of this-the sleeve is black and white but silk screened. I need to see if Parasite have released anything since-the tracks here have reminded how great they are.
Posted by Mark-Sandwell at 00:31 No comments: 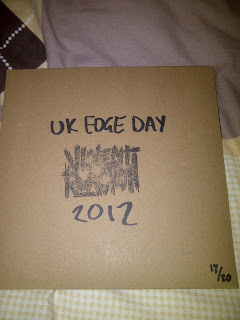 I'd forgotten all about this one-mind you, it's an easy one to forget as it's so unremarkable as a package. This came out last October to celebrate Edge day.  At first I thought they were leftovers from a show as I bought this from the band online but seeing as their first 7" sold out within 20 minutes at the release show I doubt 20 of these would have lasted long anywhere. As soon as it was announced on the band's facebook page it was gone pretty much straight away. I was one of the ones who first saw the status on goofbook and automatically ordered one.
So why is it so unremarkable-well it's the third pressing of the 7" in a plain cardboard mailer with a logo stamp, hand written and hand numbered and......erm..that's it. No bonus stickers, inserts or anything, just the 7", I could have made one myself.  Still I should count myself lucky, given the band's popularity right now, plenty of people would love to get one of these. Still, I can't help thinking that it could have been such a better package. The actual third pressing of the 7" in it's fold out sleeve looks nice though.
Posted by Mark-Sandwell at 01:15 3 comments:

Last year I finally managed to get hold of the original Larm 7"s. Now it's turn for the LPS. The first is the split with Stanx on Eenheidsfront Records from 1985. I had the tracks on a cute looking 10" bootleg but this was more desired. It's probably the most sought after item out of all the Larm original vinyl. 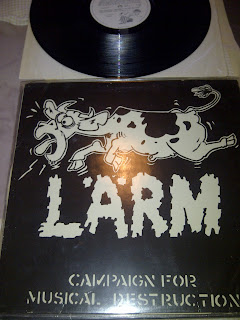 Also got hold of the 1986 LP on One step ahead records. Again , another classic release. 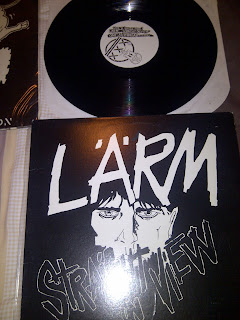 What can I say about Larm that I haven't already said before apart from that even though they are hailed as a highly influential and inspiring classic hardcore band by many, there's still plenty of folk who are unwise to them. Seriously, get on the case and track down the full discography CD or double LP. Or like me, you could break the bank and get the originals.

Stars and stripes-Shaved for battle LP 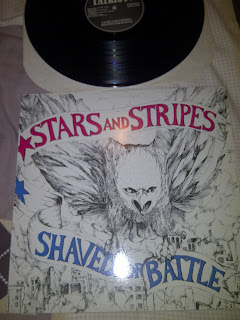 Famous for featuring Jack Kelly of Slapshot fame, this album came out in 1989 and I can remember not bothering with it because it seemed too overly patriotic which is daft really considering at the time I was (and still am) a HUGE warzone fan. Released on the aptly titled Patriot records this has become a bit of a collectors item due to the presence of Mr Kelly and with collectors of Boston HC although is more straight up oi!!, still this is a dam good record. Something that took over twenty years to realise.
The chance to own this came up so I thought why not. This goes for a bit these days and managed to get it at a  fairly reasonable price and avoided the ebay hassle. Surely a reissue would be appropriate sometime.
Posted by Mark-Sandwell at 12:23 No comments: 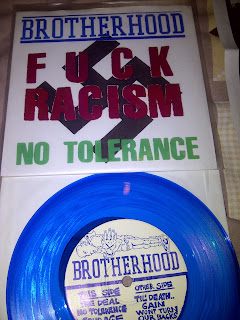 Another gap in the collection filled-the blue version of the Brotherhood 7" on Skate edge records. I've had a red vinyl copy for about 20 years along with a couple of copies of the 12" version  but this rarer colour has always eluded me for some reason. I nearly did a trade with someone off the Rev board back in the day but they turned out to be shady like a few that I encountered on there and in the Ads pages of MMR.
I figured it was time to grab one even if I had to pay a bit for it. Even though Brotherhood were from Seattle, they had a harder edged sound akin to the classic era of Boston HC  rather than a lot of the late 80's youth crew bands. This still holds up well today. Definitely one of the greats.
Posted by Mark-Sandwell at 03:53 No comments: 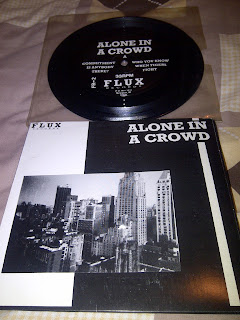 Yeah I know I've been very slack lately , part of it is sheer laziness and the other reason is even though I've been buying loads as usual I've only mainly be getting regularly stuff. I thought it was time to hit the piggy bank and chase up some bigger wants.  So much for cutting down and saving money.
An old pal whom I bought some stuff off last year still had some bits left for sale so I hit him up and spent some dough. First up from that batch is this, the first pressing of the classic 7" from Alone in a crowd on flux records. Now I had four different versions of this including a test press but I was still missing this leaving my collection feeling incomplete so here we are. My fifth copy.
This is one of my favourite hardcore 7"s ever. It's just so angry and kick ass. 24 years later and it still hits hard. Glad I went out and finally got this. Just can't believe it took me so long.
Posted by Mark-Sandwell at 12:02 No comments: