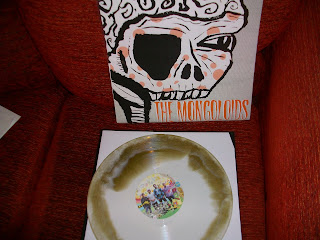 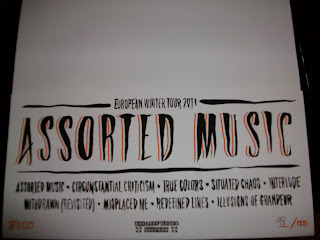 Last night the Mongolids were playing Manchester so since I 'd just discovered I'd been paid early from work I decided jump on a train and go along. Hey, what else is there to do on a Saturday night except stay in and watch crap telly.
Anyway the truth is I'm not that keen on the Mongoloids. I can't get into into that dude's vocals. Still I had a good time. It's always amusing to watch people doing that stupid floorpunch type dancing. It looks like they're fighting invisble people. Also despite the fact I'm not their biggest fan, it didn't deter me from buying a couple of records. First up a European tour press of their 'assorted music' 12" with a nice silk screened cover and numbered out of 125. 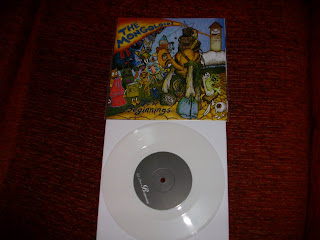 Also I picked up their last 7", dunno how many these are limited to. They may not get played much but they're reminders of a fun night out.
Posted by Mark-Sandwell at 04:10 No comments: 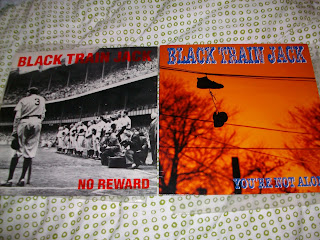 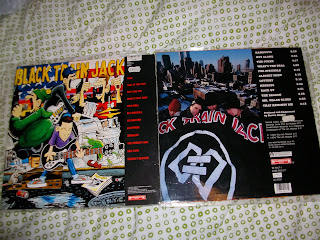 Black train jack were a band I listened to a lot during the nineties. And I mean a LOT. Hell both their albums I bought on CD and just played them all the time. I was a huge Token entry fan (well apart from that 3rd album) so when I heard in 1993 that Ernie the guitarist had a new and similar sounding band I was excited and when I first heard 'no reward' I wasn't at all disapointed. It was a bit more melodic sounding than TE but still packed a punch. The year later 'You're not alone' was released and that that was even better (although a bit more comercial sounding). Of both their albums 'You're not alone' has fared better with age. It's a more accomplished sounding album with no filler tracks (well apart from that 30 second blues jam thing). 'No reward' still has some amazing tracks but over all it's not as consistently great as 'you're not alone'. I knew a few folk who loved these at the time as well but that wasn't enough to satisfy the corporate vultures at Roadrunner who dropped them after their second album for dsiapointing sales. The band split up but members went onto to Grey Area who had a couple of albums out on Victory records.
Amazingly until now I've never owned these albums on vinyl. They probably wouldn't have been in good condition if I had anyway because like I said these two were played constantly at one time. It's annoying I had to resort to ebay and pay a bit when I remember seeing 'you're not alone' in bargains during the 90's but there you go.
Posted by Mark-Sandwell at 01:54 3 comments: 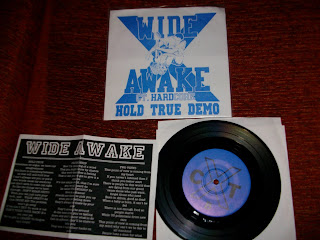 This record is still pretty much a mystery to me. Which label released it, how many were pressed and is it a bootleg or an official release? I remember seeing this in the shops back in the day so I'm guessing it's semi-legit. The funny thing listening to this record is that if a band came along today and put something out of the same standard they would get laughed at yet these guys have that classic status because they were from that right age and scene. Still as ropey as this sounds it does have that charm that make rubbish records seem... well not rubbish. Let's be honest here I still love all that old school youth crew stuff as it was a part of my upbringing in the 80's but their 7" on schism wasn't all that great. Still while many folk regard them as legendary but even back in the day I thought they were vastly inferior to YOT,Bold, Judge et all. For that reason I never bothered with this record but as someone was selling it cheap and I somehow felt it needed slotting in my old school sXe collection I decided to finally grab it. Doesn't mean it doesn't still sound a bit crappy but I'd be lying if I'm not sat listening to it with a smile on my face. Fuck, I'm old.
Posted by Mark-Sandwell at 07:31 1 comment: 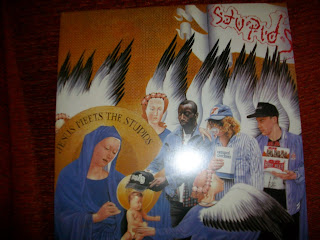 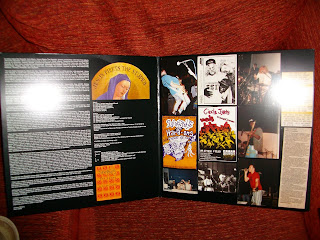 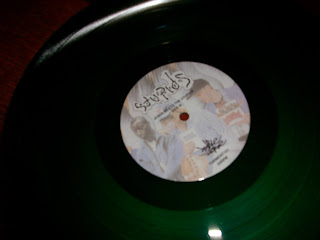 I was still at school when I bought this album, well actually my mum bought it for me. I was off school sick and she was in town shopping so I gave her a fiver and piece of paper with the name of this album scribbled on it and she came back with a shiny new copy of this classic album. Fuck, that was like 1988. Anyway the stupids were always my favourite UK band. I came from metal and crossover rather than just straight up punk so I always perfered the US style of hardcore and these guys did too and they played it as good as their comptemories. A few years ago the stupids back catalogue was re-released mainly on Boss Tunage (although Visible noise records put this out). They weren't cheap initially so since I had them all on original anyway I decided to wait until they came down in price and they did so I'm only missing one now (Van stupid)which I'm sure I'll snag sometime. This was always personally my favourite Stupids album. From the rip off intro (or homage) of ACDC's 'walk allover you' this was great from start to finish. This is a nice looking (and sounding) re-release with a lush gatefold sleeve and on green vinyl, limited to 500. Some copies of the original on vinyl soloution came with a bonus white vinyl 7" which tracks aren't included on here. No great loss really as it truly is daft.
Posted by Mark-Sandwell at 07:31 1 comment: 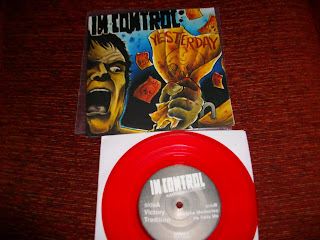 It's not every day you get a 7" record for just 1p but this week I did. I got the 'Kayfabe memeories' 7" by In control on red vinyl for that princely sum. It really did actually cost that much too as I covered the postage with another record I bought off the same guy. It's not a great record by any means but at that price you can't really grumble.
Posted by Mark-Sandwell at 09:24 No comments: 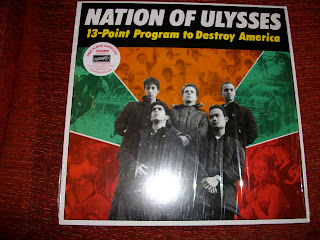 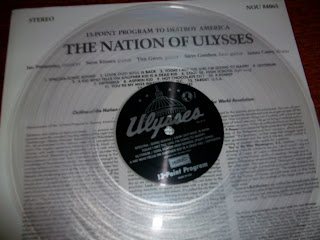 Another timely Dischord reissue, this time of the 1991 ground breaking debut album by Nation of Ulysses. Still sounds great today. Really punchy and driving and quite out there dudes. I remember going to see these live in Leeds in early 1992 and them setting fire to their shoes before they even played. That was a good gig. They all played in suits too. Anyway almost 20 years later I'm spinning this album and remebering it like it was yesterday (it really seems like it was). 1000 pressed and they may all be on clear. If you don't own this then now would be a perfect time to buy a copy.
Posted by Mark-Sandwell at 13:30 No comments:

Since this is my official 100th post and I wanted to do it on something rather special and I'm glad I managed. This is a test pressing of the great 7" on six feet under records by Belguim's Dead stop. The photos probably don't do it justice but it looks amazing. A clear plastic sleeve over a plain silver metalic one and and the back you can see it was given individually to people, in this case the previous owner. I must ask him how he got it. I only noticed it after he had given it me. I almost feel like a fraud owning it. This must be the coolest Dead stop item. This was part of a big score which I'll post later. What a great way to kick off the new year. 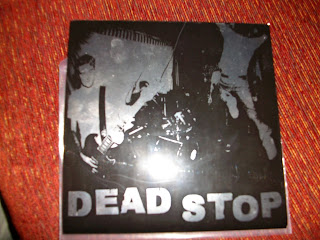 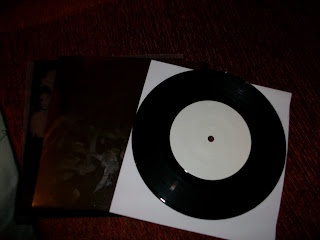 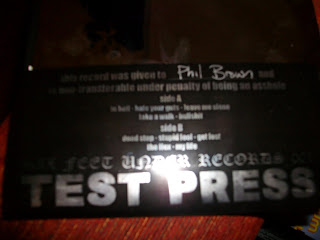 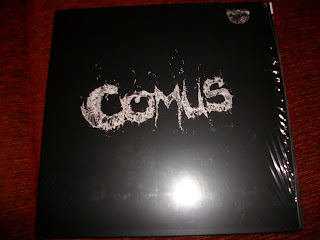 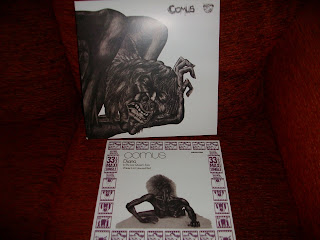 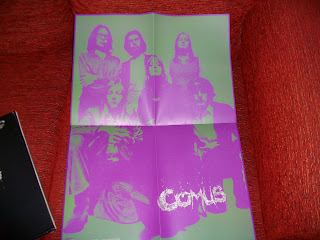 What you say is an early 70's folk album doing up on my blog (never mind living in my collection). Well this is no ordinary folk album my friends. Forget the beards, jumpers that a lot of that lot used to wear this is one of the strangest sounding records ever. I knew when Rise above repressed it that is was going to be worth a nosey and I was right-this is a pretty damn good record. The original on Dawn records is highly sought after and worth a lot of money. We're talking £450+. This version I picked up is the die hard edition which is limited to 300 and is on black wax with an exclusive 10" single and poster and comes in a nice black slip case sleeve. As per usual with Rise above die hard versions it wasn't cheap but since they usually sell out fast they prove to be worth the investment. I read in Record collector a few months ago that they have reformed and are doing gigs again but I can't imagine this working in a live setting-it's more suited to being a soundtrack to a fucked up dream or something-or maybe as background music late at night while you're reading.
Posted by Mark-Sandwell at 00:55 No comments: