Death side- bet on the possibility LP 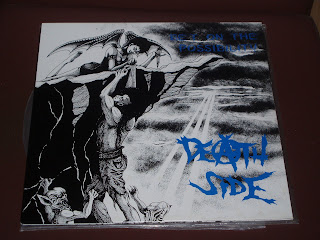 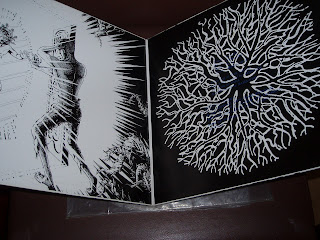 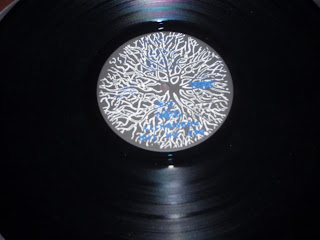 Another early 90's Japanese classic hardcore record. This one from the mighty Death side. This is their second LP which was released in 1991 by Selfish records. This is some awesome, raging shit. Like with a lot of Jap JC of the time there's an obvious but not overly metal influence.
The Japanese have always prided themselves with superb production and presentation with pretty much everything they do (toys, art, comics etc) and that of course includes records. In fact Japanese imports are known for their normally lush and beautiful packaging (usually complete with obi strips) and even in the world of DIY hardcore punk where most things are put out on the cheap, no expense was  usually spared with Japanese pressings and this is a perfect example. It doesn't have an obi strip but it comes in a gorgeous heavy cardboard gatefold sleeve with superb artwork. No wonder this is a biggie with collectors of this stuff. Like with the Bastard LP I'm super stoked to have this. 2012 has certainly been my year as far as record scores have been concerned-and we're not even halfway through yet.
Posted by Mark-Sandwell at 09:17 No comments: 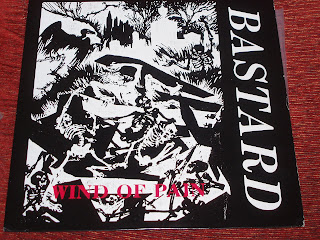 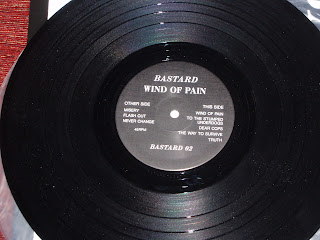 As I've said before I'm no expert on Japanese hardcore but I'm starting to get more and more interested in it especially the 90's stuff. One of the big hitters from the early 90's was this LP. Not surprisingly it's become well sought after as it was self released by the band and has never had a repress (and boy if ever a record warrants one this it's this). There is the obvious Discharge influence but it would be unfair to tag this band as another D-clone as there's more to them than that also you'd never guess that this is 20 years old. It sounds so fresh and powerful you could be forgiven that it came out last week. That's the beauty of great timeless music. Super stoked to own this. Not I need a copy of their 7". Even a repress would suffice at this point.
Posted by Mark-Sandwell at 11:46 2 comments: 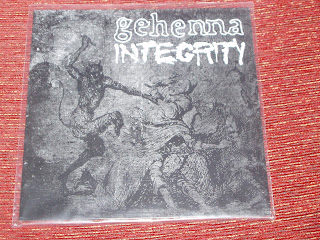 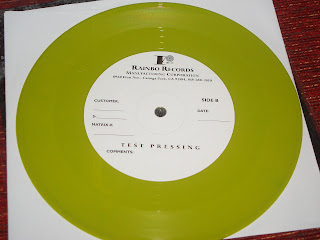 When this record was put in the Holy terror webstore I didn't pick it up because there was nothing else I wanted and it never seems worthwhile just ordering one item from the states with the postage costs but when I did decide I'd get it anyway it had sold out. Nothing more annoying than missing out on a record that you had chance to get originally. Anyway a friend announced on facebook that he had picked one of these copies (just limited to 100) on Tuesday night at the Integrity show in Sunderland on Tuesday night. Since I was catching them the night after in Manchester I thought I may be able get one after all. Funny because I was expecting Marcus to get in touch about getting him one too and sure enough he did that morning. Well good news for me and him as I managed to get two copies. It seemed that they had sold out later on unless they were rationing them out for each show. They all come with the test press labels. and look lovely on this solid green colour. The Integ track isn't one of their best but I've only listened to it once so there's time for it to grow on me. The Gehenna tracks are brutal.
I love gig/tour items especially when the show you got them from was amazing and Integrity most certainly were. In fact the last time I saw them was in France 1997 and Marcus was with me at that but that trip deserves an article on it's own (in fact Marcus did do one in his old zine).  I'm stoked that I grabbed this. Marcus, your copy will be in the mail soon buddy.
Posted by Mark-Sandwell at 04:58 2 comments: 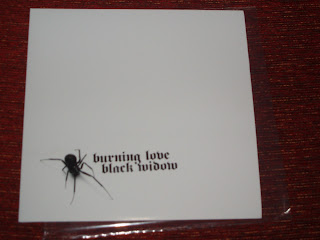 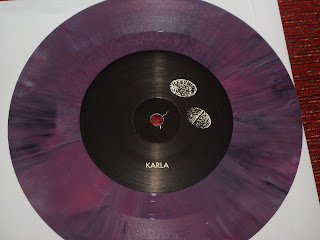 I was almost wondering what had happened to Burning love. Seems they’ve got a new 7” out and they’ve signed to Southern lord. Cool, eh? I love Chris Conlan’s vocals and out of all his bands/projects, Burning love are right up there (along with Cursed, of course). This is more of the same rocky, groovy but still harsh heavy hardcore that they displayed on the demo 7” and the ‘songs for burning lovers’ LP. High anxiety have put this out and it’s on a nice colour of vinyl. Can't wait for their next full length. Hopefully another UK/European tour is coming. They totally floored me in 2009 when I last saw them.
Posted by Mark-Sandwell at 16:16 2 comments:

Without a doubt my favourite UK band from the 90's was Iron monkey. Even though the UK scene was very strong at the time, no other band came close to to matching up with these dudes. I was lucky enough to see them a bunch of times and get to know some of their members including Johnny Morrow.  It wasn't until Johnny sadly passed away in 2002 and after attending the first Morrowfest (headlined by eyehategod) that I realised the scale of  the impact and influence that Iron monkey had made on heavy music in general. It was amazing.
Funny thinking back but one weekend in early 1996 I was staying at a friend's flat in Nottingham and James Rushby, the guitarist who actually lived next door (and was also in the band 'hard to swallow along with Monkey drummer Justin Greaves)  came round and did some record trades with me but said he had to leave early as he was getting ready for doing a recording the next day with his new band. It turned out to be this absolute beast. First released as a CD by union mill (which I still have the original of), it wasn't until Earache signed them up in 1997 and then reissued it that it properly made such a jolting impression on the unsuspecting public. Us cool cats such as Marcus and myself knew how great they were before everyone else caught up. 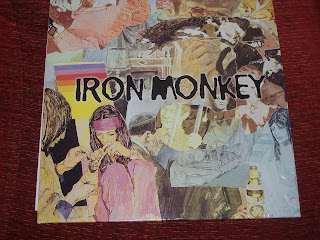 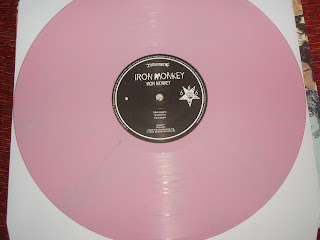 15 years later after Earache first re-released it (and 16 years after it was first  recorded and originally released ), it is unleashed again but on vinyl so new and old fans alike can get involved. I managed to pick up the most limited colour, 'shrimp pink' (as earache have called it). Just 100 of these. This is a fucking awesome record. Johnny's vocals are almost demonic. 16 years later and it I still get floored everytime I play it. Whatever format it's on.
Posted by Mark-Sandwell at 09:15 6 comments: 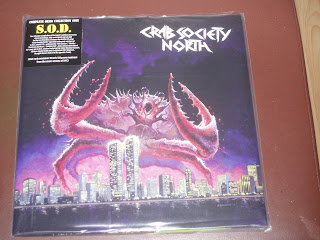 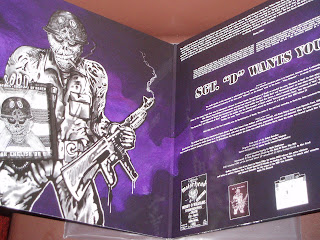 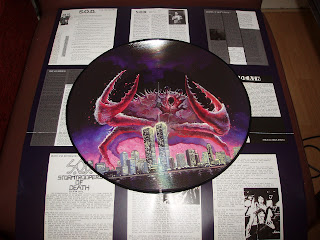 I'm a life long SOD fan. After all they were one of the bands I got into that got me into hardcore. I first heard 'speak English or die' when I was 15 on the side of a dubbed cassete (DRI or crumbsuckers may had been on the other side). Despite the fact that Billy Milano was an utter cock and the questionable lyrics (were they really being ironic?), it was some of the heaviest music ever and still remains so to this very day. There's nothing I can think of that's harder sounding.
So the aptly named FOAD records (I haven't heard that term since I was a kid) have put out this LP which contains both demos (if you call them that). They're rough sounding and if it wasn't anyone important like SOD then you would dismiss this as utter crap probably but as it stands it's an important musical doccument of an era long passed by.
FOAD have outdone themselves in the packaging department too. This thing looks great and comes in a lush gatefold sleeve and on picture disc. Normally I wouldn't care less about picture discs as they sound like shit but to be honest it doesn't make much difference here and you have to admit it looks pretty sweet and face it -picture discs are so 80's -and they are very METAL!!!!
Posted by Mark-Sandwell at 08:01 4 comments: 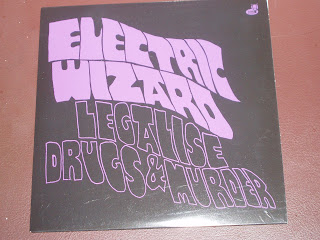 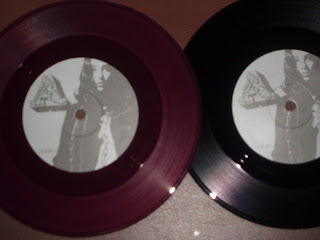 New single from Electric wizard and it's a fucking beast. I do love da wizard. There's  3 colours of this record. Purple (limited to 800) and Black (standard colur-around a million copies probably) which are pictured above. There's also a clear vinyl version which is limited to 800 and was only sold at one show. They keep popping up on the bay so I'm confident that I will snag one at a decent price sometime.
Posted by Mark-Sandwell at 00:12 No comments: 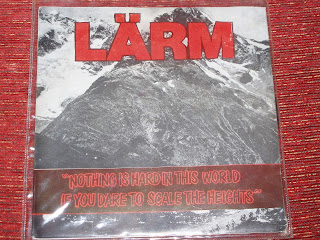 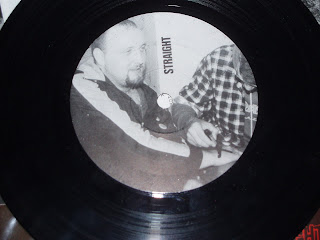 Another killer 7" by Larm. This one was released in 1987 by Definite choice records. As I mentioned in my previous post that Larm were hugely influencial musically on many bands but also it was their DIY ethics which inspired generations of hardcore punks too. Apparently they turned down an offer to record for nuclear blast records. It makes you wonder how things would have turned out if they did-would they had gone down the crossover route and become another dull run of the mill band like so many of the late 80's-shadows of their former selves? We'll never know as they stayed DIY.
I'd like an original Larm/Stanx-split LP if anyone has one for trade/sale. Hit me up.
Posted by Mark-Sandwell at 11:26 No comments:

Larm-No one can be that dumb 7" 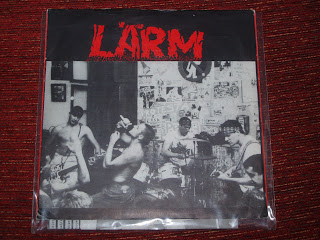 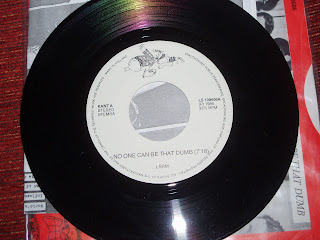 Another long time want captured at last. It's the classic 7" by the Legendary Dutch band Larm. I have  a bootleg of this that I picked up in the early 90's. Most hardcore bootlegs from around that period looked and sounded like shit but this one is pretty reasonable. That said, there's nothing like owning an original version,