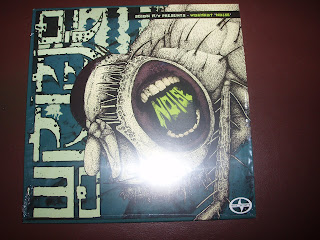 This was a strange 'buy'. First up Earache (who I got it from) announced they had some of these in their store and they were free if you paid the £5(!) postage. Hmm okay. It still seemed like a good deal as these are all new tracks. It is indeed a 'promo' as it says so on the sleeve and label. Next up it's a collaborated release between Earache and Scion and Toyota (yes the car manufacturers). I'd heard that Toyota were sponsoring grindcore and death metal bands but I guess I had to see it to believe it. Now I've seen it I still find it hard to digest. If someone had told me twenty years ago that this would happen I would have laughed in their face. So besides all that I'm glad I picked this up. I really like Wormrot, they play full throttle grind. The way it's meant to be.
Posted by Mark-Sandwell at 05:56 1 comment:

About 3 months ago I ordered the Axis and Deathbed 7"s from this label. Anyway after a while I got in touch to see where my shit was and I got a email back saying he'd check. Numerous emails from me later I got nothing back-no records, no replies. Looks like I've been conned. Seems the guy who 'runs' this label has a rep for being shady. Anyway I guess the point of the post is to warn others and to try and avoid anyone else getting fleeced. Cunts like that have no place in hardcore. And if you are reading Garret Lewis then be warned I will be posting on all the main forums about you being a fucking thief.
Posted by Mark-Sandwell at 00:31 No comments:

Steel tormentor-Return of a king LP 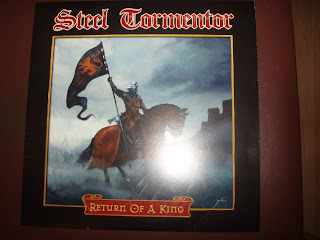 I must admit I don't buy much new (not 'nu') metal stuff these days but I had to make an exception for this awesome album by Ireland's Steel tormentor. This is very traditional sounding metal-definitely a NWOBHM vibe going on. Don't let the Slayer shirt on the back fool you. This is self released by the band and anyone who likes it proper unashamedly metal(that means you Mike) should give it a go. I discovered this by accident and it's the best 'accident' that I've ever had. Check that cover out. Manowar and savage steel would be proud.
Posted by Mark-Sandwell at 08:04 1 comment:

Death is not glamorous-Undercurrents 7" Tour sleeve 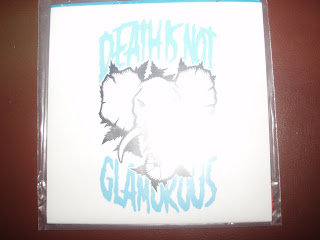 One of the things I miss about Dead and gone records is the fact that they used to release records by bands that I probably wouldn't have got round to checking out if they hadn't come out on that label. Norway's Death is not glamorous were one of those bands. I remember ordering their 7" back in 2006 and automatically liking it. It was positive, upbeat and inspiring feel good hardcore-the sort of stuff that puts a smile on your face as soon as you hear it. Death is not glamorous are still around and quite recently put out a new album which is as good as anything else they've ever done. Anyway back to this 7". It must have sold well as there were 3 different pressings. This one was sold on their UK tour in 2006 which I recently scored for cheap on Ebay was from the first press and was one of the black vinyl copies. Like a lot of bands that toured around that time I didn't catch them but if they ever make it over again I'll definitely make the effort next time round.
Posted by Mark-Sandwell at 00:00 No comments: 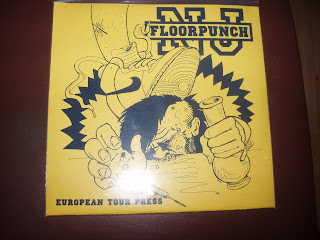 I was gutted at the beginning of 2010 when I missed out on the Floorpunch reunion and even more gutted when I found out that there was a special version of their discography on SFU records made up exclusively only for the European tour. Of course these things soon became Ebay gold and I ruled out the idea of ever getting one. So to my surprise I managed to bag one recently at just £12.50. I really lucked out there as copies had just sold before and just after at around £50-I just hit the right week. The funny thing is that I didn’t realise that I’d won it until over two weeks later as I had been in hospital for an operation and the guy had forgot himself to check Ebay so it arrived over a month after I actually won it. Still I’m chuffed to get such a bargain. The truth is that this thing isn’t much to look at. It is numbered out of 150 but the packaging is very basic and the labels are blank but fuck it because it is Floorpunch and I had to own it.
Posted by Mark-Sandwell at 09:10 2 comments: 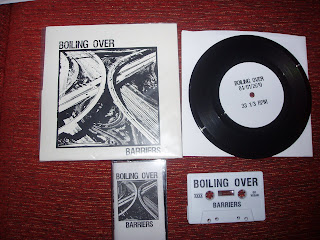 Boiling over played great SxE hardcore and put out a very underrated 7" 'Trash city' a few years ago on Lifeline records. Their follow up was originally a tape. I hate those fucking things. Always have and always will, I don't care if there's a revival of sorts they still look and sound like shit. Anyway one of them landed as a freebie in a record order with Lifeline a while ago and despite the actual sound quality being piss poor (it is a tape after all)I wanted it on vinyl. My prayers were answered when I discovered that there had been 150 pressed on wax for their last show (in January 2010) and even better they still had some left in the lifeline store. So here you go-both releases back to back. I do like the 'go vegan' slogan on the tape though. Great band, they will be missed. By those who remember them anyway.
Posted by Mark-Sandwell at 02:47 4 comments: 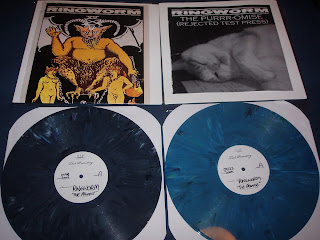 A while back I scored a test press of the A389 release of the classic Ringworm album 'the promise'. It was the accepted test so I knew I needed the rejected one to make this thing complete so I managed to grab one the other week (numbered out of 15). They look nice together don't you think? I wouldn't mind an original Indecision test pressing now although I'm not holding my breath.
Posted by Mark-Sandwell at 01:02 2 comments: 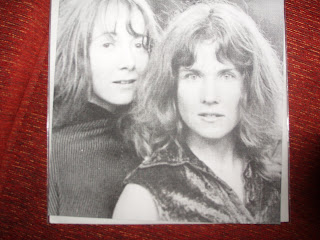 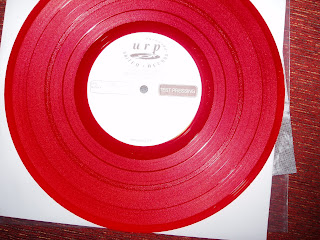 Another day, another A389 test press. Actually out of all the things featured in their recent 24 hour test press sale this was the one I wanted the most (and typically it was one of the more expensive items). Released originally back in 2003 as a CD on Deathwish records this is one of my favourite Integ records and it came after a string of pretty dodgy releases (Closure, that horrible 'covers' CD etc). This was the Integrity that I knew and loved and they were back on track. The vinyl was a long time coming. At one point it even looked like Marcus of Endless quest would be putting it out but in the end A389 did the honours. I already had the 3 limited colours of this release so adding a test to the collection seemed like the logical conclusion (unless they put it out again on another colour of course).
Posted by Mark-Sandwell at 01:36 3 comments: 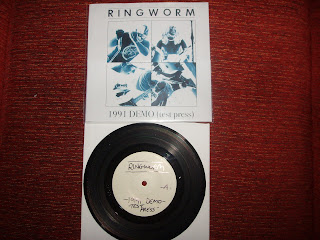 The first time the Ringworm demo first saw the light of day on wax was back in the 90's was when it came as a 7" with the almighty Blood book zine. Any a couple of years ago A389 decided to repress it to go with the deluxe version of the re-release of 'The promise' album. I decided to grab a test pressing when was available and it's pretty cool looking. Nothing flash, just a nice one off item.
Posted by Mark-Sandwell at 23:59 4 comments: 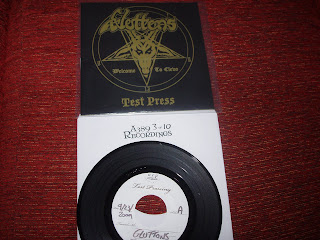 Recently A389 had one of their 24 hour test pressing sales. I ended up going on a crazy buying spree since I had a rebait from my gas bill. This was one of the cheaper items as I guess not a great many people bought this when it came out. It was a band featuring Human furnance of Ringworm but there was more of a Motorhead rock n' roll style rather than the intense metalcore that Ringworm blast out. Pretty damn good but sadly overlooked. The test was just limited to 10 copies with a great alternate sleeve-a rip of of Venom's welcome to hell. Instead it reads 'welcome to Clevo'. Great stuff!! This a nice addition to my clevo HC collection. Shame the actual record just came and went.
Posted by Mark-Sandwell at 00:45 No comments: 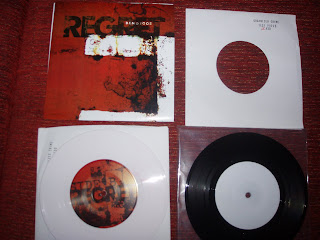 Recently while placing an order (OK about about two and a half months ago-this took a while to turn up) I decided to add the Regret-Demo 2005 7" that organised crime records put out back in 2006. Even though I'd never heard it before or knew anything about it I figured it was cheap and because OCR had put it out and most of their records are good. So when it finally arrived I was pleasantly surprised not just to get one of the limited to 61 mailorder versions on white vinyl but also a test press numbered out of 20!!! How cool!!! Anyway sticking this on it's very typical of early to mid noughties hardcore. Many bands were doing the Metal tinged thing (ala American nightmare) and these were no exception. There was a former Holding on member involved too. It's a good little record-well played and all but I can see why it got lost in the shuffle. I guess many bands of the time stood out a lot more. Anyway it's nice to finally hear it and of course wind up with two very limited pressings.
Posted by Mark-Sandwell at 23:08 No comments: 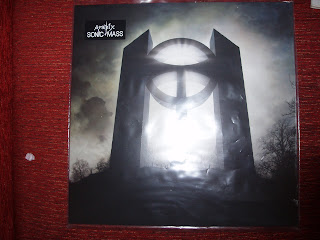 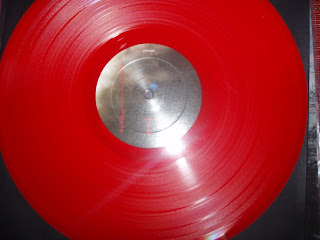 The new album from the mighty Amebix. Only been 24 years since the last one, that's some osrt of record surely. Anyway the most important matter is whether it's actually any good or not. Some are saying it isn't but but I think this is a superb comeback from a band who were so influencial on many bands that are bigger in name (Neurosis etc). The new stuff does have goth elements to it but boy, when it's heavy , it's damn heavy. Also helped by the fact that this is probably the finest sounding production job that they've ever had. It's like they've finally been able to to do the record they've always wanted to. I imagine these still to be a force to be reckoned with live. Easy action records have put this out and the entire first pressing is on red vinyl with a snazzy looking gatefold sleeve. The second pressing will be on black and so will the following pressings but in a regular sleeve (as opposssed to a gatefold one).
Posted by Mark-Sandwell at 08:44 No comments:

Night birds-The other side of darkness LP 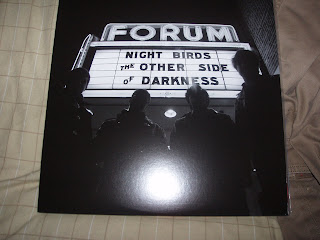 After a string of 7"s, the Night Birds have finally dropped a full length and it's their best release yet (in my humble opinion). It's a mix of old school hardcore punk with surf guitar elements and oh and these guys love horror films too so how can you fail. In fact there's a sound bite from the classic movie 'Brain damage'. All copies of the first pressing are on black but a very limited amount of the pre-orders came with a special sleeve which sadly I missed out on. Oh well. If Grave mistake records repress this on colour I will certainly buy another copy. That's what us nerds do right?
Posted by Mark-Sandwell at 01:45 1 comment: