Personally it hasn't been the greatest year of my life (although definitely not the worst) but what 2010 has been is a great year for music (to these years anyway). Seriously I was talking to a mate at work who has similar musical tastes and he shared the belief-2010 was fucking awesome for music. So here's my best.

Best records of 2010.
Integrity-The blackest curse (deathwish). Best Integ release since 'to die for'. Nuff said.
Off!!-The first 4 x 7"s (vice). Awesome Keith Morris fronted supergroup. Still one of the best vocalists in hardcore.
Black breath-Heavy breathing (Southern lord) Entombed worship!!!
Cathedral-The guessing game (century media) This was a real surprise and definitely split opinions-you either loved it or hated it and I was one of the former group.
Electric wizard-Black masses (Rise above) This was always going to be great. The wizard can do no wrong (on record at least).
Ghost-Opus eponymous LP (Rise above) Another surprise-one that took a bit of getting into but once it hit the spot that was it-awesome.
Bloodtype-s/t (Cowabunga)Awesome pissed off sxe. Just straight and direct-no messing about. The way hardcore should be.

Plus many more LPs and 7"s by Heratys, Ceremony, Witchsorrow etc. Heck I'd be here all day.

Let's hope 2011 is another great one. Happy new year everyone and all the best.
Posted by Mark-Sandwell at 10:52 1 comment: 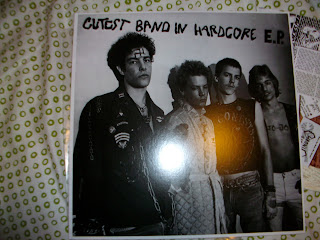 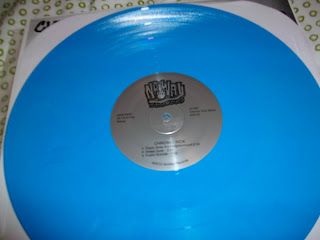 I love No way records-and I try and get the colour version of all their vinyl releases and unlike the majority of labels these days who press about a million different colours, No way do it the old way and that's by releasing the majority on black and just a few on colour making it feel exclusive-like it used to be one time.
Anyway after missing out on the Social cirkle LP on clear last year (which I still haven't scored yet) I knew I would have to be on the ball when this dropped (along with the repress of the Chronic sick 7" too). Thing is this took like forever to come out but there I was every other day checking the site-like a man with a mission. When the orders finally went up I lucked out and got both this 12" and the
7" along with the new Acid reflux 7".
I'm ashamed to say I've never heard this record before. Of course since the 1983original pressing on Mutha records is very rare and commands well over $1000 you could probably forgive me but in this digital age of downloads and file shares I have no excuse really. Well I can see what the fuss is about-this is awesome. It's as good as some of the big records by the big bands of the time (Flag, circle jerks etc) and what I found really surprising was how well played and tight musically this is as there were a lot of sloppy bands around at the time. Some of the lyrics upset a few folk at the time but it's pretty obvious they were done in irony, Irony doesn't always translate well via music or a lyric sheet though. Even though the 7" is very good this is vastly superior .
No way have come trumps again here. It looks and sounds great and nice blue colour too. Just 150 of these and they went straight away. More awesome reissues please.
Posted by Mark-Sandwell at 19:55 No comments: 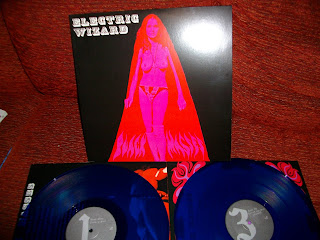 When I found out that this was getting released I was determined to snag a die hard version and I was lucky enough to do so although it hasn't turned up yet. Anyway on my way home from work yesterday I nipped in my local record shop, saw this in and couldn't resist buying another copy. There are 7 different colours of this LP in the first press and that's not including the die hard box (which is on black vinyl). No doubt Rise above records will do a second pressing (with a million more different colours)
This blue one is limited to 400 and is a nice colour me thinks. Anyway onto the music, you know what you're getting with the Wizard. Awesome doom metal. Unsurprisingly this is one of my favourite albums of this year. I've been bumping it on my Ipod for about two months but finally it's on the format in my collection that matters.
Stay tuned for a post about the die hard box (when it arrives!!)
Posted by Mark-Sandwell at 08:12 No comments: 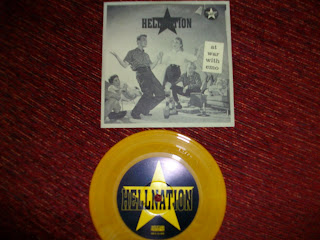 Slapaham records are easily one of my all time favourite labels. In the 90’s I used to buy religiously anything they put out. Most of the releases are definitely what you would term as classic. I used to buy direct from the label as it was usually the only way you could get the limited colour version (which were usually in runs of 200). These were the days before paypal where you would trundle off to the travel agents or bank and exchange British money for some dollars, put them in an envelope, send them off and hope for the best. The only Slapaham record on colour from round this era I missed out on was this cute little 5” and it’s because my mate got some in for distro so I settled for a black one although I did try and wrangle the only colour copy he got sent off him. Although he wasn’t a vinyl collector nerd like me he decided to keep it, probably just to annoy me. When he finally agreed to sell or swap it me he couldn’t find it. That was his story anyway. Well, let’s skip to twelve and a half years later and I’ve finally got myself a copy. Although it’s not a pricey item or anything it has been a toughie to track down so I got lucky when someone posted a set sale list on a forum and I managed to grab it-at long fucking last.
I love the colour-I always thought it would be one of those shitty see through type yellow vinyl records but it’s a nice solid one. Although it does actually play on my deck I still hate playing records this size-a right ball ache. You missed the groove and that’s your needle fucked.
Great thrash-Hellnation always delivered the goods and you’ve gotta love the title of this record too. Emo was a bit of a problem in hardcore at the time-this was before it turned into the pseudo Goth shite that plagues society these days. Wankers!! Still have a few holes to fill in my slapaham collection including the Neanderthal 7” on purple although I’m not holding my breath for that one turning up on my doorstep anytime soon.
Posted by Mark-Sandwell at 12:19 1 comment: