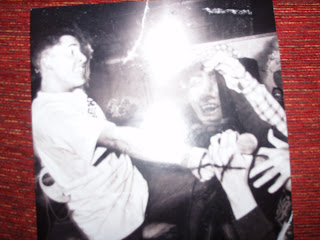 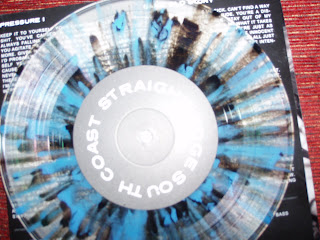 Since I'm old, don't go that many gigs like I used to and basically a bit out of the loop with things I forget that there's quite a few great hardcore bands in the UK at the moment. One of these is the mighty Never again. They've already had a discography of their first year output pressed recently (with the tracks off this on it)so that shows they definitely have a strong following in their short time. This is their debut 7" and is just limited to 200 on this splattery colour. The black vinyl version was selling for nearly a tenner the other week on eGay so I was surprised when I won this for nearly half that much a few days later. Maybe it was because it didn't have 'sXe' in the listing's title. Anyway this is fine sXe hardcore which is nice and rough and unpolished unlike a bands playing this stuff. The lyrics are pissed off and instantly click with me. Hell, even at nearly 40 I can still relate to that, especially after a shit day at work dealing with bell ends. Bands and records like this keep me sane. Anyway check out their discog LP (on holy roar).
Posted by Mark-Sandwell at 13:02 No comments:

Damn, I know I haven't posted for a while but my camera kept fucking up so I've had to dig out my old one which isn't as good. I have loads of shit to post so let's get on with it-following from my last post which concerned the A389 bash last month in Baltimore (which I didn't go to) my good buddy Mark picked up something else too-a flexi disc of Integrity's harder they fall demo which was done especially for the show by organised crime records. Yes, I know flexi discs suck-they sound horrible and I'm always scared of putting them on my deck in case they crumble or something. Anyway it's Integrity so any format is acceptable. There were two different versions of this the black one which numbered 71 of 65. No, I don't understand either but apparently these went before the doors were even open. 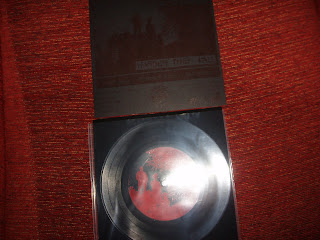 And the white cover/clear version which is numbered 105 of 150. Both come with a download cupon so you don't have to even play the things. 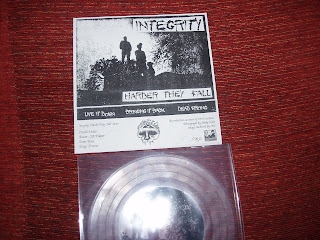 Again, mucho thanks to Mr Breadman for getting me these. Stoked.
Posted by Mark-Sandwell at 08:58 No comments:

The other weekend there was a special 7th year anniversary show in Baltimore featuring loads of great bands such as Integrity and Rot in hell as well as other heavyweights such as Haymaker, Drop dead etc. A fucking great line up. I decided around July-August I was going to try and make it but a £700 roofing bill and my bad hip put an end to those plans so when the event rolled around I was gutted. One comfort I did have though was that my good friend Mark (who plays bass in Rot in hell)agreed to pick up some goodies for me including some exclusive Rot in hell stuff that was made for the show. The best one was this fucking ace looking 7" pack which comes wrapped in a special holy terror balaclava (not recommended for wearing on airports). This is a fucking beast. 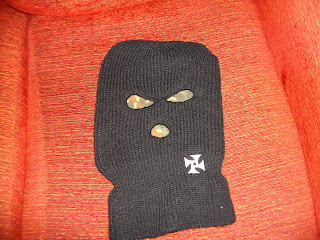 Once you take the balaclava off it comes in a knitted camoflague sleeve. 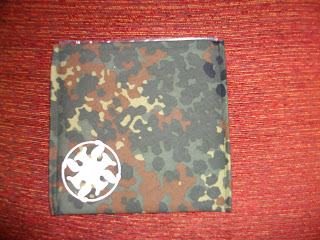 And out of that it looks like this. Complete with a CD (numbered) of their recent live 12", patch, flyers and comes on a handcut green vinyl. This is magnificent. 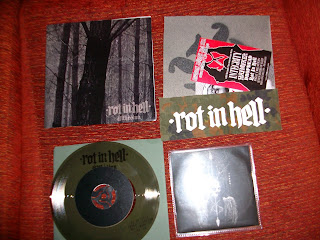 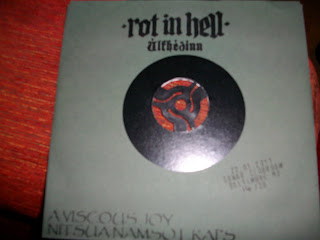 As you can see above this numbered out of 30 and they all went straight away. It contains 2 exclusive tracks (I haven't even played it yet!!).
I'm very lucky and honoured to have this. Thanks Mr Breadman, much appreciated.
Posted by Mark-Sandwell at 03:51 2 comments: 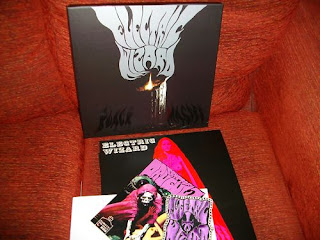 Well here it is, at long last. I got very lucky with this one. I knew the pre-orders would go up without warning so I kept checking and checking the website and one morning while at work via phone I saw they were finally up so I grabbed one and unsurprisngly they were sold out within hours. That was about 2 months or so ago but feels longer. I got more anxious waiting for this to arrive especially seeing that they are selling for as much as over £250 on egay already. Excuse me but that's fucking crazy. Anyway here's my copy. Limited to just 400 in a nice box with a patch, poster and comic and on black vinyl. There are 7 other different colours available and like a sad bastard I bought them all. The first time I can say I own every pressing of one electric wizard album (except the test of course). Anyway this album rules and I'm stoked to have this.
Posted by Mark-Sandwell at 10:37 No comments: