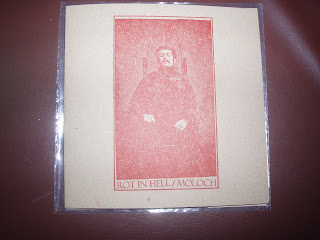 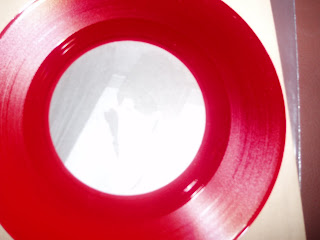 Another split 7" from the ever productive Rot in Hell, this time it’s one with Nottingham’s sludge merchants Moloch. This Rot in hell track (‘cauldron born’) is one of their best in a while and if Nate has really left for good then it could sadly be one of their last. I think a 7” of recordings they did in January in the states is meant to be coming out sometime on Organised Crime records but don’t quote me on that. Moloch sound a lot like Eyehategod on here (which of course isn’t a bad thing). Feast of tentacles records put this out and 100 of them are on red vinyl in an attractive and very 90’s looking cardboard sleeve. A great record, go and grab one before they vanish.
Posted by Mark-Sandwell at 23:24 No comments: 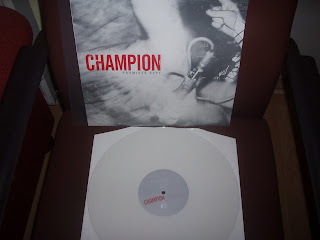 Dead and gone pressing on white vinyl, 200 made, my fifth copy of this classic sXe album. Mike, I'm slowly catching up.
Posted by Mark-Sandwell at 21:55 1 comment: 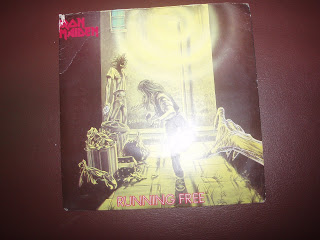 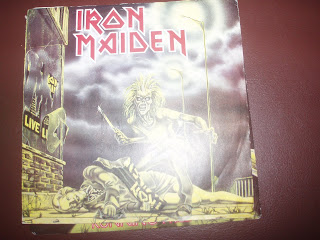 One thing I’ve started to regret over the last few years is getting rid of my Iron maiden collection in the late 80’s. It was a good collection too (pic discs, coloured vinyls etc) but as soon as I got properly into hardcore I took it to my local record store and did a trade against some LPs (No EBay back then) and got ripped off. Anyway although it would be painful (let alone expensive) to start collecting Maiden stuff again I decided a bit ago I’d still like some of the early stuff on original pressing. A guy at work said he had the first two 7”s so I kept pestering for him to bring them in and he kept forgetting-after a while I thought he would never get around to it but this morning I thought I’d drop him an email and he’d remembered to fetch them. Stoked, wasn’t the word!! Anyway here’s the first two 7”s ‘Running free’ and ‘Sancturay’, both released by EMI waaay back in 1980. Most of the Iron maiden picture sleeves are amazing but these are two of the best in my opinion especially ‘Sanctuary’. When Margaret Thatcher dies I reckon there should be a punk festival in celebration of her death and this artwork should be on the flyer. Quite fittingly I’m off to see Maiden this Thursday so this has psyched me up even more. Up the irons!!!!!
Posted by Mark-Sandwell at 06:30 2 comments: 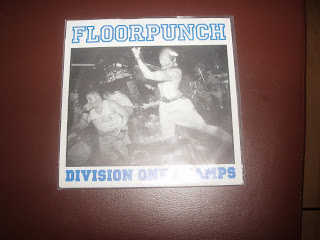 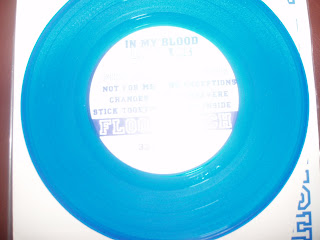 It's not that often these days that I actually do trades but I still like doing them when you deal with a like minded individual who operates fairly and don’t try and take the piss (sadly that excludes a lot of the Hows your edge board). Anyway one item I did seclude in a trade was a second pressing of the Floorpunch 7” on blue (limited to 800). Floorpunch should need no introduction really. Along with In my eyes they were the biggest band to come out of the late 90’s youth crew revival and were known for their in your face and often controversial attitude. Still, whether I disagree or not with some of the things they came with , I can deny musically they still kick my ass so I’m pretty happy to own this copy . I only have two different pressings of this record_I have some catching up to do.
Posted by Mark-Sandwell at 23:31 No comments: 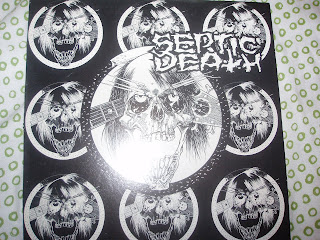 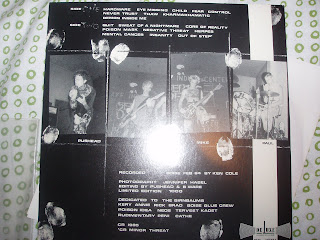 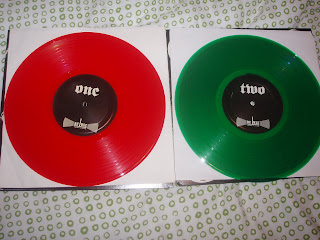 The insanity of record collecting sometimes isn’t just getting records that you don’t want to play (like ultra rare items, test presses etc), or records you can’t play (like the Slight slappers 2” that slapaham records put out). It’s also getting records that you don’t even want to listen to like this Septic death live 10” but get anyway just for the sake of completion. The reason I don’t want to play this record is because the sound quality is beyond dreadful. The first copy I ever scored off Ebay a few years back had a disclaimer off the seller about the quality of the sound. An unusual way to try and sell something but at least he was honest. Still such things don’t deter me because I’ve been a Septic death fan since the late 80’s and although I realistically can’t see me owning everything by them I still can’t resist picking their stuff up-even if it is shit. Hey, at least the sleeve looks cool if nothing else. I picked up a red copy in a trade recently and it looks pretty good next to the green one I already have. These were limited to 1000 a piece I believe and there’s a splatter vinyl of just 100 copies out there too. Deluxe records who put this out also released a Gang green 10” which was pretty rubbish as well (although it didn’t sound as bad as this). Still another item to add to my ever expanding Septic death collection, even if it’s staying on the shelf.
Posted by Mark-Sandwell at 00:02 1 comment: 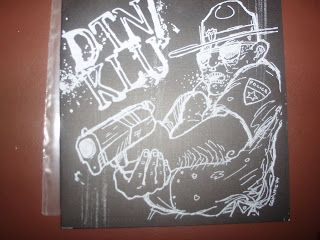 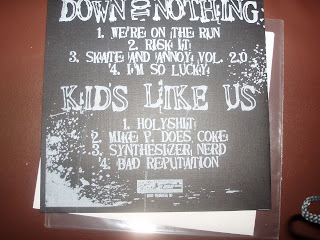 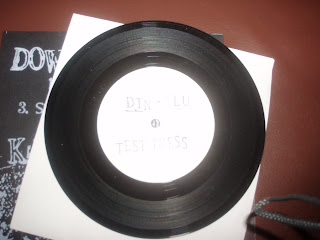 Another Down to nothing test press, this time of the split 7" with Kids like us which came out on the now defunct Knife or death records. It's another pretty nicely packaged item. It's a pretty basic layout with the cover but this copy is silk screened so it looks and feels pretty cool. Both bands compliment each other well. The sound of youthful, energetic hardcore which the members were probably in their golden moment of hardcore in their lives (not that it goes downhill or anything but it does reach a certain crucial time that can never happen at any other point). I know that may sound like twaddle to some but others will understand. Anyway I'm pretty happy with this score.
Posted by Mark-Sandwell at 00:08 No comments: 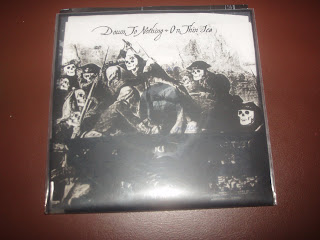 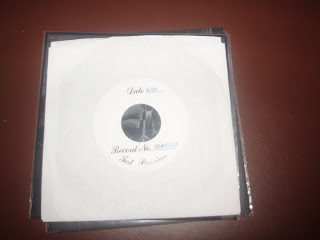 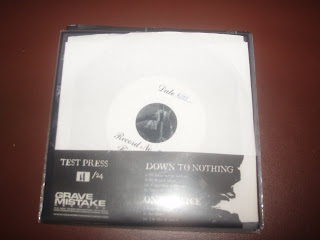 I love Down to nothing but they are a collector's nightmare (or dream depending on how you look at it). Loads of stuff out, loads of different pressings etc. This is a test pressing of the split they did with On thin ice back in 2005. It was released on two labels-Grave mistake in the US and Dead & gone (RIP) over here in the UK. This is the Grave mistake version, numbered out of 24 in a clear PVC sleeve which looks fucking rad. A nice item for sure but it also reminds me I don't own half as many DTN records as I probably should. Then again I haven't won the lottery yet either.
Posted by Mark-Sandwell at 09:13 No comments: 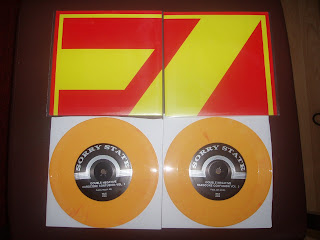 What’s better than a new Double Negative 7”? Why two new Double Negative 7”s of course. Now if I was cynical (which I’m not-honest) I could moan that these 4 tracks that weigh in at under 10 minutes long would easily squeeze on one single piece of vinyl but let’s be honest don’t they look awesome together? DN records always seem to have lavish and awesome packaging and these are no exception. Musically you know what you’re getting too-quality hardcore punk from people who have been around longer than a good part of today's hardcore scene were even born yet play fresh, innovative and exciting music and don’t depend on living on past glories like a lot of old timers do. Sorry state have put this out and they’re limited to just 500 a piece so get yours now or cry later.
Posted by Mark-Sandwell at 07:15 No comments: 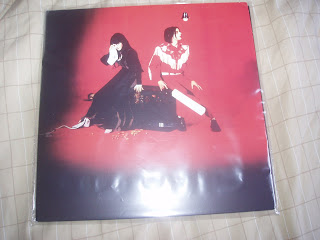 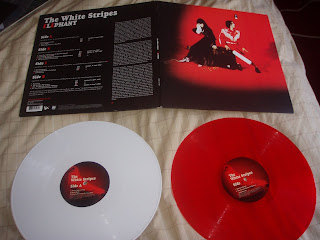 I know, I know. I actually only got into this band a couple of years ago kind of by accident. I obviously knew of them before but had never paid any attention to all the raving that the press and everyone was doing about them. I was reading a bunch of old Maximum rock n’ roll mags I had dug out and found an interview with them in one of them. I was shocked because I couldn’t believe that they had once been that underground and how big they had become since. I decided to check out this album out as they had it cheap in my local store and really got into it but recently started listening to them again and got the urge to start getting more of their stuff. I have some catching up to unfortunately. Lucky for me this double coloured vinyl turned up cheap on the bay the other week and I managed to grab it. I say cheap, by comparison to how much it normally fetches. This is still my favourite album (that I have heard by them-I don’t have them all). It’s brilliant and varied and uncompromising too-it doesn’t sound mainstream at all yet obviously a lot of the music buying public fell for them. I just wish I had gone to see them live now
Posted by Mark-Sandwell at 23:34 No comments: 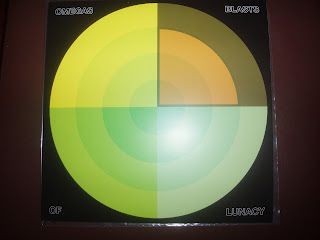 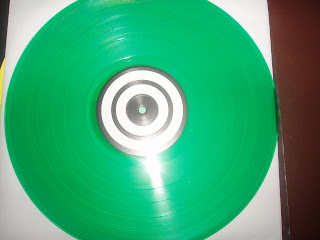 Props to Simon Kelly for introducing me to this awesome Canadian band. He said ‘if you like your old Boston and NYHC stuff then you’ll love this’. He knows that I do so I would have been surprised if this was anything but great. I love the cover. It looks like anything but a brutal hardcore record-hell, you could probably pass it off as a 70’s Kraut rock album but it’s just so striking. Parts unknown records put out the US release but over here in Europe, Hardware records from Germany did the honours and this version is limited to just 100 copies on green. (I believe parts unknown did a clear vinyl pressing but their fucking site is down at the moment). I’ve only listened to this a couple of times so far but I have a feeling it may wind up on my best of 2011 list. It’s been a good year so far for music-and we’re only halfway through.
Posted by Mark-Sandwell at 23:58 No comments: