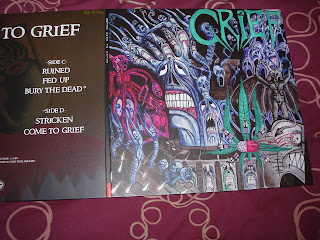 When I found out that Throne records from Spain were putting this classic album out on vinyl I was stoked. They announced it a year or so before they even started taking pre-orders so after a while this seemed like it was never going to happen. Anyway after the record was available to pre-order there was a delay at the pressing plant which took a few months and then I thought my package had been lost in the post when I found out they were all sent out a bit back. Thankfully my package showed up this week. It's a one time pressing of 666 copies and I opted for the two colour editions (222 of each, the last lot being on black). It's one heavy package and I don't just mean the music. As you can see above it comes in a lush gatefold sleeve and also includes a nice print (see below)
. 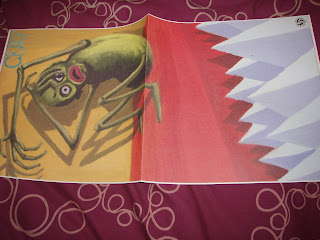 Also the colours are orange and black/blue splatter. 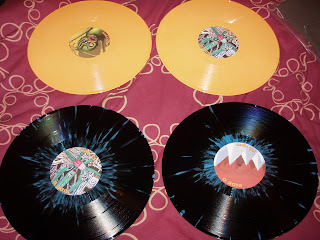 It does sound good too. I've had the CD for years so this was great to finally see (and hear) it on wax. In case you slept on it, this is one of the most heaviest, most miserable albums ever. I love it!!! Have to say with the currency being the way it is and heavy packaging it wasn't too cheap but having pre-ordered it ages back it would have cost me a lot more now as the Euro/pound thing has gotten even worse since.

Posted by Mark-Sandwell at 07:14 No comments: 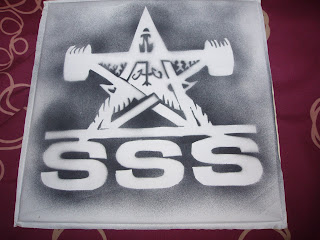 Yeah I have been slack posting stuff up I know, it's not like I haven't had much in either, just good old fashion laziness. Anyway this did come this week. It's the 2nd (superb) LP from Liverpool thrashers SSS. This was sold at the release gig back in October but I missed the show and thought getting one of these wasn't ever going to happen as there were only 30 of them-which all went in the first half hour I believe. Luckily someone contacted about selling me theirs so I bit their hand off. Like the thrash bag(see previous post) this is sewn up so unless you want to unstitch then you can't get in the fucker. Well us record nerds never actually play the things anyway do we? It actually contains the white vinyl pressing (limited to 100) and the 7" and some other crap. Musically it's awesome, just as their first LP was. Total 80's crossover worship which is where I came from. 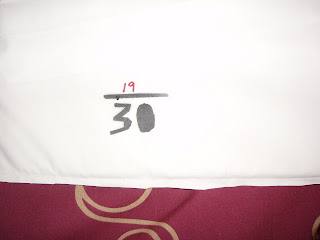 As you can see mine is number 19 (like the crap Paul Hardcastle track).