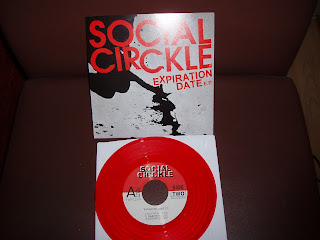 Caught the almighty Social cirkle last week in Liverpool and they kicked some ass. The last time they played there in 2009 I missed them and was gutted-worse still, I was actually in Liverpool that evening-waiting to board a plane to Berlin. Bad timing. Anyway apart from a great show I also picked up their new 7" on red vinyl. 5 tracks of straight up hardcore-no bullshit. Released on Side two records-not sure of the pressing info. I believe this is their final recording. Sad news but at least they go out with a bang.
Posted by Mark-Sandwell at 02:05 1 comment:

Black flag-Process of weeding out 10" 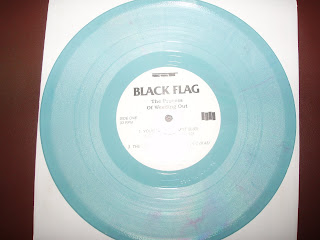 My least favourite Black flag release on 10" colour vinyl. This version was released in 1990 and according to Chuck Dukowski (who played bass and also worked at SST records) there were only a few hundred of them. Balck flag colour vinyl is highly sought after these days so it was by luck I got this off the bay cheap because the seller didn't mention it was colour vinyl in the main title of the listing. I just never got this record. Don't get me wrong Gregg Ginn is one of my all time favourite guitarists but these 4 instrumentals just sound really ordinary. Despite the lack of fondness I have for this I'm still happy to own a colour copy and slot it in my collection. Sadly my copy came with a slight crease on the corner of the cover. Damn royal mail!!!!!!!
Posted by Mark-Sandwell at 05:32 No comments: 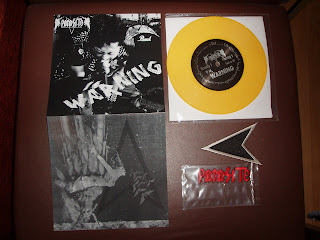 More Parasite. This time we have two tracks on one side of a split. The first one is pretty mid paced while the second is some raging Discharge influenced punk. Great shit. The same can't be said about Vermapyre though. Is it black metal, is it punk? It's so badly played and recorded that I can't really tell. It's pretty bloody awful and totally soils this release. I got the pre-order yellow vinyl with patches from Holy terror records which seems sold out but I've just found out there's a purple vinyl out now, limited to 100. Damn!!!! Anyway despite the shitty b-side I'm loving Parasite right now. More please sir!!!!
Posted by Mark-Sandwell at 03:34 4 comments: 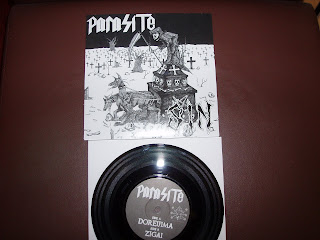 A bit ago I picked up Parasite's metal punk masacre 10" and was blown away so their 'sin' 7" immediately went onto my wants list and last week I managed to secure a trade involving a copy so I was pretty pleased. Two more tracks of brilliance. Mid paced Japanese with a large dollop of metal. These guys like their Maiden etc. This was released by Tadpole (who did the 10") and was sold out very quickly. Not sure of the pressing info-about 300-500 copies I'm guessing. I've already seen one on the bay for daft money but you can never tell with prices on there sometimes. What might be gold one week can end up selling for peanuts the week after. Besides it's about the music not how much money you can make on a record. Hopefully the world will catch how good these guys are. With a release out on Holy terror records, the plan for global domination could be starting.
Posted by Mark-Sandwell at 02:22 2 comments: 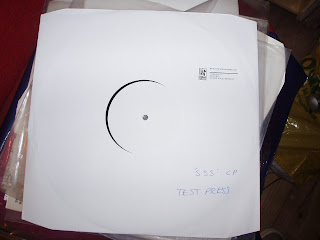 Decided to expand the SSS collection by adding a fifth copy of their first album to it. A test pressing, it's about as basic looking -wise as you can get but when there's only 10 of them, it makes it the rarest version I own. Still I wish they I had done a cover for it though. Scary to think it's around 5 years since this was released. Originally released on dead&gone and thrashgig records (which this copy is)it was re-released when they signed to Earache (and more pressings followed). Now I wonder if I can bag a test pressing from the earache stock?
Posted by Mark-Sandwell at 03:28 2 comments:

WARHEAD - This world of confusion / Acceleration 7" 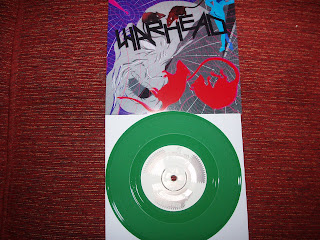 Some raging shit here. Two tracks of total aural destruction. As I said in a previous post I'm not that clued up on Japanese hardcore but on the strength of this and the new Parasite 10" I probably need to get more involved. This just sounds so out of control and chaotic. Released simultaneously in Japan thru H:G Fact Records, USA thru Feral Ward and Europe thru La Vida Es Un Mus which this green vinyl copy comes courtesy of. 100 were pressed on this colour and they sold out pretty much straight away. One of the very rare times that living in the UK seems like a bonus. Glad I nabbed one of these, just luck I guess, being off work and spending too much of the day browsing forums and online record stores.
Posted by Mark-Sandwell at 01:58 No comments: 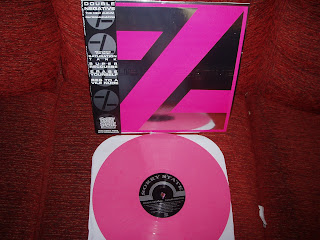 I remember Lins posting this up on his blog and kicking myself as the pink vinyl was already sold out. I snoozed and I lost. Anyway over a year later I managed to track one of these beauties down and it is one of the best packaging jobs I've seen for a long time on a hardcore record. Hot pink wax that blends well with the foil sleeve and even includes a strip for the sleeve. This photo honestly doesn't do it justice. Double negative play some raw and stripped down in yer face hardcore, these guys are lifers and have been around for years in various bands from the late 80's. A new 7" is on the cards (also on Sorry state who released this), get in!!!!
Posted by Mark-Sandwell at 00:47 1 comment: 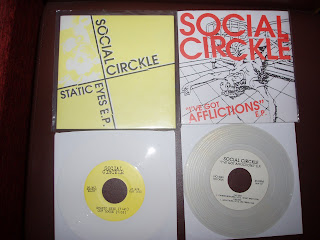 Man, I love Social cirkle. I got these 7"s (both released by No way) when they came out but the colour versions were gone by the time I placed an order (they went really quick as I recall). Anyway not to worry I believe in destiny and I was always going to get them at some point, a bit later than I expected but here you go. This is the second pressing of 'Static eyes' on white and there was 500 of these, as for 'I've got afflictions' there were 200 of these on clear. I still need some bits and pieces like the 'city shock' LP on clear or the No way fest version as well as 'static eyes' on yellow. If you have these and can live without them let me know. Also they're playing Liverpool in over a week's time. I'm already there dude.
Posted by Mark-Sandwell at 01:52 1 comment: 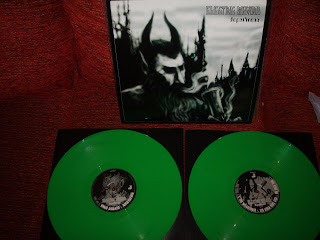 It's very handy having a record shop just a mile from my house but of course I can't usually go in there without purchasing something so after record store day I decided to keep away for a bit especially since I've been buying records off various people online anyway. So the other day I popped in for just for a browse (honest) and there were about 3 items that I could have purchased on the spot but I had to restrain myself-well apart from buying another copy of Electric wizard's dopethrone on green. Come on-I'm not strong willed. Anyway for those keeping track, there was a repress last year on boring black which I bought since I didn't have an original copy on wax but when I saw this I just had to have it too. Not sure of the quantity of this yet, rise above's website is pretty shit-it's not even listed on there (neither is the new Firebird LP and that's out in the shops too). Still if they brought out another pressing next week on a different colour I'd probably buy that too. It makes perfect sense...to me anyway. I'd had a really shit day as well dealing with scumbags on public transport so going home and listening to this was the perfect soundtrack while I wallowed in hatred and fantasized about wiping at least 80% of the human population off the face of the earth.
Posted by Mark-Sandwell at 15:03 No comments:

Just added two more copies of this classic record to my collection (makes four different versions I own now). First up is the repress by Reflex from a few years ago on solid purple vinyl, just limited to 100. Looks really nice actually, I was expecting clear purple for some reason. Reflex did do good jobs on their releases-what happened to them I wonder? Next up and more importantly is the original on Xclaim. One of the pricier and much more sought after things on the label (next to SSD's 'the kids will have their say'). This is one of those things I thought I'd never own but one came up for sale and I thought 'fuck it' and caved in. Some things just have to be done. 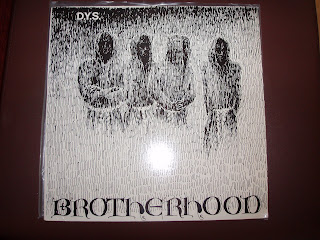 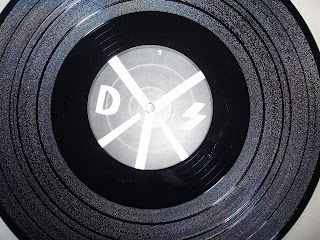 Nothing to really say about this record except every self respecting fan should have at least one version of this record in their collection. If not, give up now.
Posted by Mark-Sandwell at 04:32 2 comments:

Quite a few folk seem to be selling off their collections here in the UK (including Mr dead & gone himself, Ian Wiles) which is good news for me but bad news for my bank account. It's amazing to think what the label achieved really-40 odd releases and some genuine classics in there. Sadly, Ian is still clearing up his debts so those idiots who dubbed him as a money grabbing rich kid (and someone did, on the profane existence board a few years back) were clearly talking out of their arse.
Anyway onto today's entry-a couple of test pressing-first up the Black Thursday 29 debut LP 'The escape'. Good band, they did two more LPs (the second one on D&G). They played good heavy but heartfelt hardcore, sincre as hell. I like the Gorilla biscuits rip off cover, numbered out of 15. 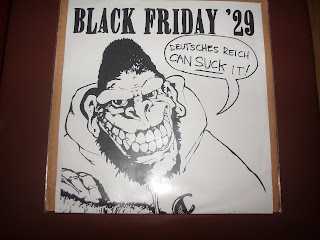 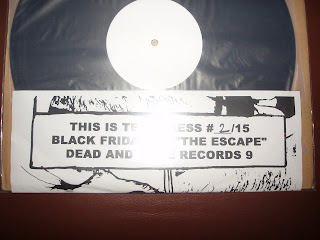 Next up is another great record but is just a plain no sleeved test pressing of the Death is not glamorous (or DING as they are known as on this cover)'undercurrents' 7". These guys were from Olso, Norway and played really nice melodic hardcore. Again sincre as fuck. I believe there 3 pressings of this 7"(and a CD version)so it was pretty popular. They also did a LP ('Soft clicks') and split 7" with the Down and Outs, also on D&G but this is my favourite release of theirs. 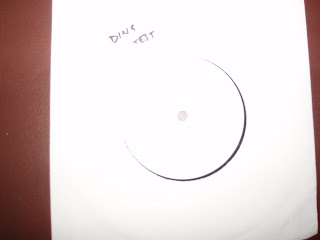 This is what the cover actually looks like (taken from my CD sleeve, I'm too lazy to go and dig out the 7") 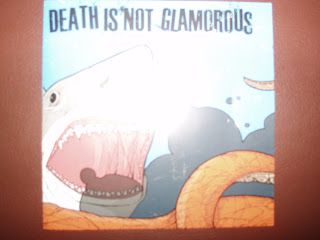 It's been good for me at the moment with scores and there's plenty more to list too.
Posted by Mark-Sandwell at 23:07 No comments: 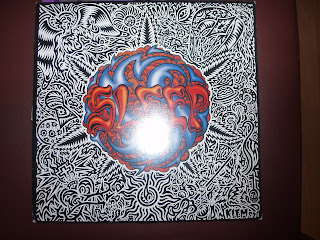 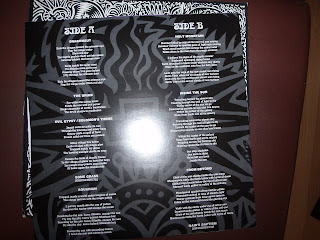 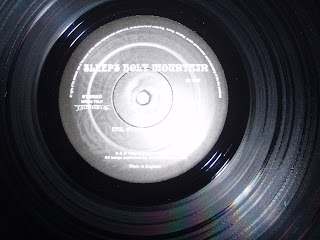 Classic stoner metal that's still as worshipped heavily today as it was back in the nineties. I always owned a copy of this on CD but skipped the vinyl on it's intial release, shame on me. This has been repressed since on Kreation on different colours of vinyl but this is an original on earache. It's on boring black but it's on very heavy vinyl. Got this in a big haul recently so it worked out pretty well price wise. I love my stoner/doom metal but I always listen to it a lot during the winter-just seems better in the darkness and coldness of England, mind you our summers are usually shit too so there's even more reason for blasting this out constantly.
Posted by Mark-Sandwell at 02:18 No comments: 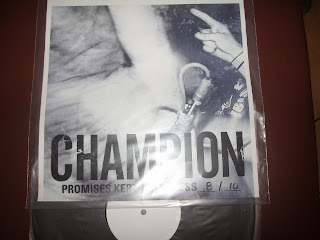 Today's entry is a test pressing of a noughtie's classic hardcore album, 'Promises kept' by Champion. This was instant gold on it's release. This is the European version on the defunct and sorely missed Dead & gone records. (Bridge nine did the US release but you know that already). My copy is 8/10 and nedless to say I'm pretty stoked to own this. I have 4 copies of this record now and no, that isn't enough.
Posted by Mark-Sandwell at 08:55 2 comments: