Kiss it goodbye-She loves me, she loves me not LP 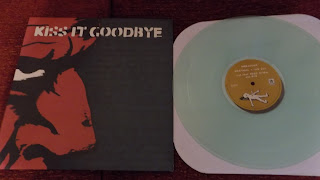 Here's one that's been on my wants list nearly forever. This album came out in 1997 via Revelation records. I knew I was going to love this straight away as it feature ex-members of Deadguy and Rorscach. Two bands I fucking loved. Despite owning a promo CD that I got sent to review for an old zine and grabbing the white vinyl repress from a few years back, I still needed this first pressing on clear wax (of just 317 copies pressed). Finding one on eBay from a UK seller made me more happy as I didn't have to pay insane postage costs. Fuck USPS!!!!
Posted by Mark-Sandwell at 07:51 2 comments: 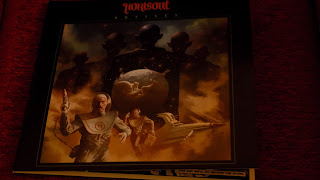 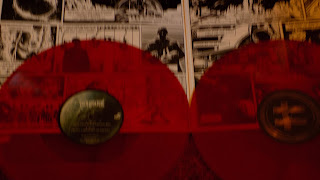 I Haven't bothered much with Rise above records properly for a while. At one time I would pretty much buy anything on that label but ridiculous postage rates and the boring prog/folk stuff they started churning out soured me off. I'm only really interested in the crushing doom metal and balls out rock they used to specialise in putting out and thankfully this ticks the later box. I didn't bother with the clear vinyl die hard release when orders went up (kinda regret that now). I figured I would end up with either the black or blue vinyl (limited to 1000 each) when I saw bought a copy from the Manchester show with the shrine and Kadavar last weekend but was pretty happy to get this red version instead. No idea on the pressing details-they weren't sold via the store and there's no info as yet on Discogs. Time will tell no doubt.
As for the music-well it's fucking awesome. It appears to be a concept albums with a 10 minute first track but there's enough rockers on here. Great songs, great riffs, great moustaches

Posted by Mark-Sandwell at 02:33 No comments: