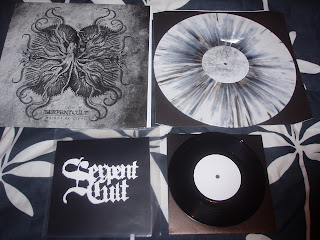 Another heavy band from Belgium fronted by a female singer, this time on the mighty Rise above label. I bought this superb crushingly heavy doom LP when it came out in 2008 but noticed that RA still had some of their die hard editions in their store which is surprising after all this time really. I’m guessing this wasn’t a big seller for the label and seems to have slipped under the radar with many fans which is a shame as it’s a real gem of a record. The die hard version is limited to 300 copies on a nice white splattery vinyl with a bonus 7” and poster. 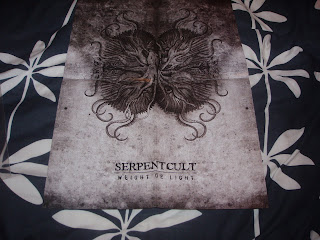 Like hardcore I do love my doom stuff too and this is a perfect example why. They played at a rise above special show in London back in 2008 headlined by the mighty Electric wizard. I had a ticket and a hotel booked and was really looking forward but there were heavy showers and rain throughout the country and many of the train lines were closed down as a result (any fucking excuse) so I ended up missing the show. I was just a bit pissed off. Anyway it’s nice to have another copy of this album.
Posted by Mark-Sandwell at 00:27 No comments: 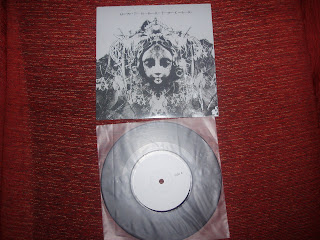 Oathbreaker are an awesome band out of Belguim. They play very heavy and metalic influenced hardcore and have a female vocalist who certainly knows how to abuse her vocal chords. Also they have an album just out on Deathwish which you should probably go and get because a) I told you to and b) it is really great. No, seriously. Anyway I was lucky and honoured to have a test pressing of their debut 7" on Thirty days of night records given to me. It didn't have a sleeve or anything so I've just put it next to another copy. As stoked as I am to have this it's made me realise that there's another colour of this record that I'm missing. I can see another order coming on.
Posted by Mark-Sandwell at 01:48 No comments: 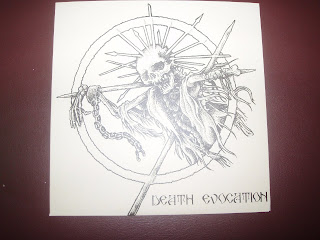 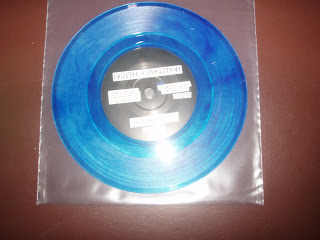 Quality control is a new label and already I'm damn impressed with their output. First was an awesomely packaged Stab cassette and then there was the Crazy spirit demo 12" and now we have the Death evocation 7". I think this band features people from more famous bands but I haven't worked out who just yet. These 3 tracks are reminiscent of the old uk metal/punk band Sacrilege (especially with the female vocals) but there's also a good dose of slayer in there. Fuck, yeah. This record is great. 100 on a beautiful blue vinyl and with a great sleeve. These won't be around long so act fast.
http://qualitycontrolhq.bigcartel.com/product/death-evocation-7
Posted by Mark-Sandwell at 01:35 2 comments: 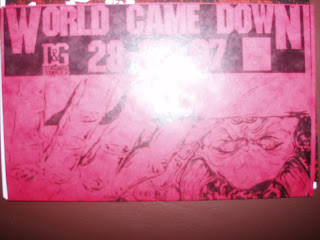 Another variation of the debut Deal with it 7". This time a numbered (12/30)edition from the record release show. No, I didn't go but thanks to Ebay I can now pretend that I did.
Posted by Mark-Sandwell at 11:04 No comments: 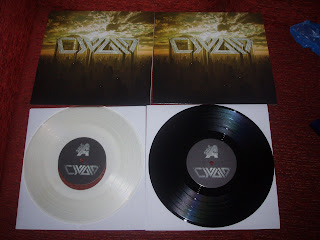 If you were a fan of Send more paramedics then you need to check out this band. It's ex-members doing exactly the same thing musicially except instead of zombies they're singing about aliens and sci-fi related stuff this time time round. Still lots of Slayer in there (which of course aint no bad thing). Thirty days of night records put this out-100 on black and 200 on clear. Grab one before they all vanish.
Posted by Mark-Sandwell at 00:43 No comments: 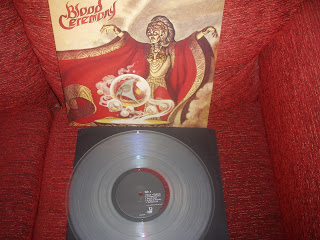 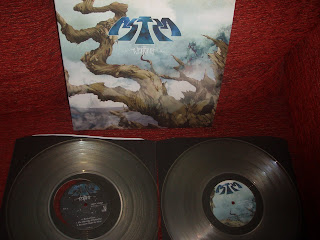 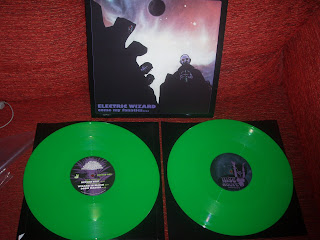 Rise above are one of my favourite labels around but you have to be alert as they often sneak out their vinyl releases and repressings into their store without warning and if you don’t act fast you’ll end up missing out. Such was nearly the case recently when I decided to have a look and discovered that they had re-released the first Blood Ceremony and Astra albums and just an hundred copies of each were on clear vinyl. Predictably a few days later they were gone but I decided to grab them both along with a new green vinyl pressing of Electric wizard’s classic album ‘Come thy fanatics’ (1000 pressed). I already own original pressings of all of these records but that’s what us geeks do right? Buy more variations of the same damn records,
I wasn’t keen on the first Blood Ceremony self titled album when it came out and to be honest it doesn’t do much for me now but I still couldn’t pass this version up. Thankfully the band have redeemed themselves with this year’s awesome ‘Living with the ancients’ album. Astra’s ‘the weirding;’ was another record that I wasn’t too fond of when I first got it. It took a while but I really grew to love this album. ‘Filthy hippy music’ I call it but it’s a really smart LP.
Of course ‘come thy fanatics’ is a different story. This album has always kicked my ass. My other copy comes with a 7” which wasn’t included with this release. Keeps the original still highly collectable I guess. This isn’t as limited as the other two but it will sell out eventually. People can’t get enough of the wizard. All in all a good haul. Just a shame rise above over charge on the postage and that’s just in the UK. I really for people like Mike when they place orders. They probably need to take out a second mortgage. 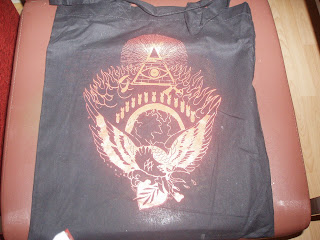 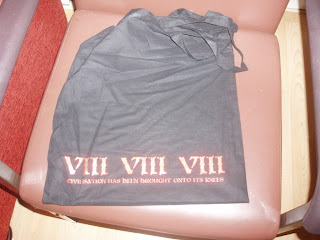 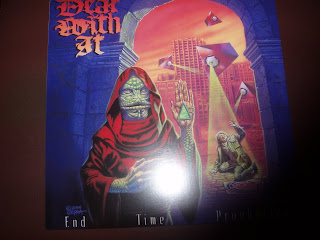 Deal with it are one of the best bands around in the UK right now in my opinion and their first album 'End time prophecies' is still my favourite release by them. So I was pretty stoked when I won a release show version off eGay for just £3.20 which comes in a totte bag (or whatever you call them) with cool artwork by Sam Layzell (he of Sick-fuckin-O and Closure fame). Yep this will do and is now my third copy of this LP. Anyone fancy helping me complete the set and selling me a test press?
Posted by Mark-Sandwell at 08:23 1 comment: 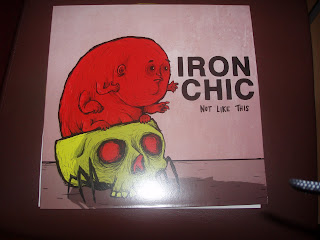 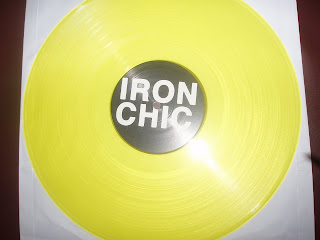 I love Iron chic, one of my favourite new bands right now. Just great hard hitting yet melodic punk. This is their debut on yellow. Not sure of the pressing info as this is the Euro release on Yo-yo records. Dead broke records did the stateside release and there are several pressing on different colours. The shopping list just gets longer....
Posted by Mark-Sandwell at 09:53 No comments: 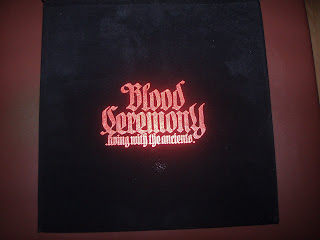 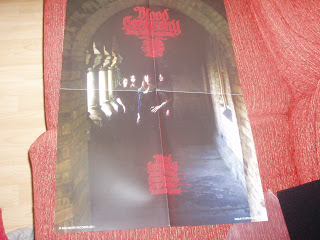 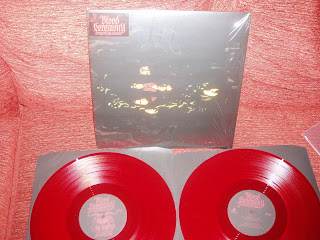 The second album from these Doom merchants and it’s definitely one of my favourite releases of the year so far. At first I wasn’t too thrilled about hearing this as their debut album didn’t grab me too much. There was something lacking about it compared to a lot of the quality stuff that Rise above records were putting out around then and there was too much bloody flute playing on it. This time around there is still quite a bit of the old flute abuse but it actually blends in rather than annoyingly standing out. There’s some awesome songs on here (‘Daughter of the sun’ and ‘Great god plan’, just to name two) and it is HEAVY, obviously taking it’s influences from a lot of early 70’s rock stuff (Black Sabbath more notably). Rise above did a special edition of 500 for the geeks, 250 on red and 250 on black. They went really quickly but obviously the red ones were the first to vanish. It comes in a nice sleeve pouch cover and features an exclusive poster made up for this release. It wasn’t cheap but they, these things always sell out and turn up on EBay for silly money so you just have to bite the bullet sometimes. It’s all worth it in the end.
Posted by Mark-Sandwell at 23:51 1 comment: