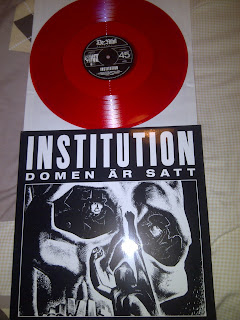 This was one of my favourite records of last year. No nonsense Swedish hardcore with ex-members of Heratys, Meanwhile etc-you knew that it had to be great. The first black vinyl pressing of this sold out very quickly but here's a limited second pressing on red. 300 I believe. Bring on the next pressing (and colour).
Posted by Mark-Sandwell at 07:46 8 comments: 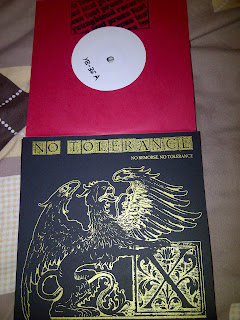 Most of you should know about this band and this record already so I'm not going to get into the an depth story of one of the best 7"s of last year. Other people have done better posts about it but I will add my newly acquired  test press to the mix. When I saw Marcus' post a bit back I decided that I just HAD to get one of these even if I knew it would set me back a few quid (or bucks) so here we are. No doubt that this is probably my favourite score of this year so far. The gold on black silk screened sleeve is beyond beautiful and it comes in it's own 'test press' stamped dust sleeve (and even a lyric sheet). Seriously this is the shit and completes my collection of this record nicely. I believe 25 were made. Stoked!!!!
Posted by Mark-Sandwell at 23:03 3 comments: 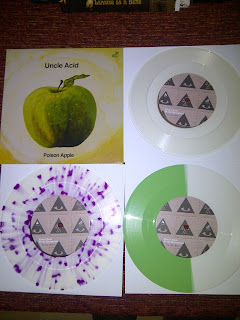 This new Uncle acid record dropped for pre-order a while ago. As expected shit went crazy on the Rise above site. I got lucky on two counts-one, I actually only found out that it was going up for pre-order an hour before while dicking about on a work's break and secondly because I actually managed to bag one of the most limited versions-the clear vinyl (out of 100) along with the two other mailorder colours (200 pressed of each). Even before the records were shipped, people were already selling them on Ebay which really pisses me off as the clear vinyl was limited to one per customer so these scumbags only bought them not because they were fans but simply as a quick means of exploiting someone who had missed out. Mind you, it doesn't stop people from paying through the nose. And even though all the copies on the site sold out within a week (including the black vinyl) I found out that there are a variety of other colours available in the shops. I'm not getting into that game again. This is where my collection of this record ends.
This is a taster for the new album and I must say along with the B-side ('under the spell') if these tracks are anything to go by then it's looking very rosy although I'm not looking forward to trying to pre-order the damn thing.
Also it's interesting to note although the sleeve just says Uncle acid on the front, on the actual record label it still has them down as Uncle acid & the deadbeats. Weird!!!!
Posted by Mark-Sandwell at 23:31 1 comment: