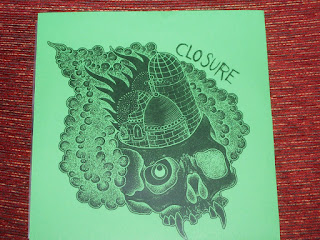 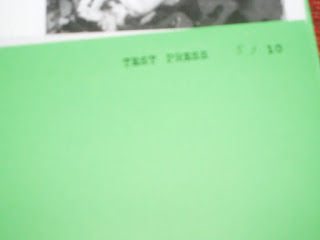 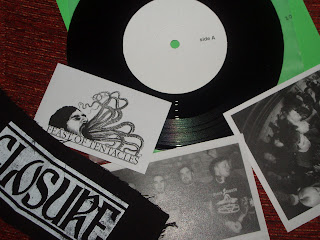 I saw Closure a couple of weeks ago which was apparently their last gig. If that's true then it's quite fitting that I should bag this test pressing a few days later of their first 7" that was released by Feast of tentacles records last year. It's a nice looking record complete with a patch and other bits and numbered out of 10.
Closure played fast grind/power violence styled hardcore and were simply just pulverising live and on wax. They'll be missed.
Posted by Mark-Sandwell at 10:48 No comments: 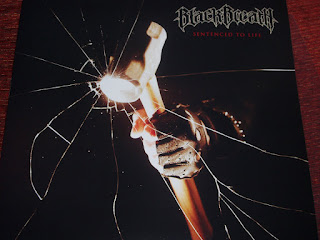 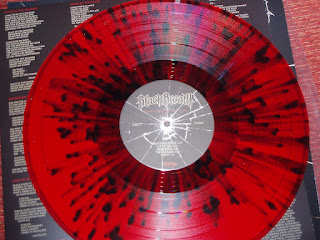 Black breath new LP same as the last LP i.e. Entombed worship. Still there's no denying that this shit is good. Southern lord very kindly sent the colour I asked for this time and even removed the records from the sleeves as requested. They're getting better on the mailorder front.
Black breath play the UK next week and are touring with Victims and Christian mistress. I'm going to the Manchester show. Can't wait. Should be killer.
Posted by Mark-Sandwell at 13:26 1 comment: 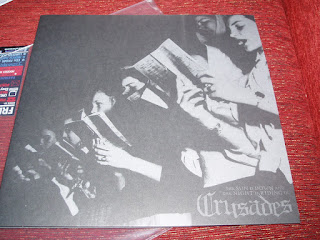 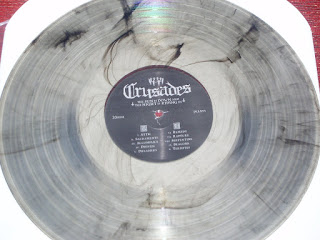 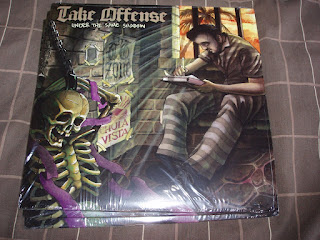 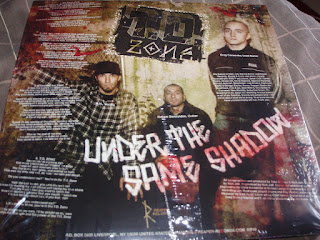 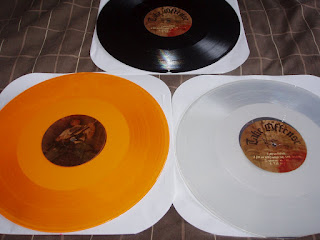 I know some of my blogger friends really hate 10" records. Personally I don't mind them, I think one sided records are worst especially 12" ones. I don't care if it has etching on it or not (which this one doesn't), I still feel cheated. Anyway since this is Take offence I had to buy this and since I'm a geek I had to get all 3 colours. I first heard Take offence last year by accident really when I saw them playing with Fire and Ice and some other bands. They absolutely blew me away and easily wiped the floor with all the other bands on the bill. I picked their up their album at the show and constantly listened to it for months and still do (hell I even had it on my I pod last night while travelling to a show). This new 12" has four tracks and they seem to be going more down the Suicidal tendencies sounding route. Since ST are one of my all time favourite bands I have no objection to that. The back of the sleeve has a similar layout design to that of the back of the No mercy album. Coincidence? I doubt it. Anyway I can see this getting a lot of play over the next month or so.
Posted by Mark-Sandwell at 00:36 4 comments: 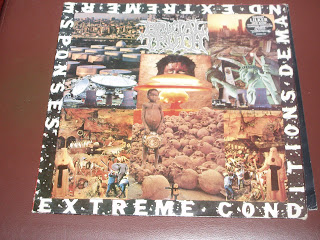 Another LP I used to won and another one that I stupidly decided to trade and then got ripped off by some motherfucker on the old Revelation trade board. I always had a CD of this and I jumped on the vinyl repress a couple of years back but there's nothing like owning an original. To be honest, I prefer Brutal truth's second album but this is still a grind classic. I remember being knocked over when I first heard this (way back in 1992, fuck). It always delivers. A zillion kids heard this album and decided to start their own grind bands and I bet not many of them got even close to matching the quality and brutality on here. Brutal truth did do some ropey stuff later on but I can stick this on and remind myself how great they once were.
Posted by Mark-Sandwell at 00:36 No comments: 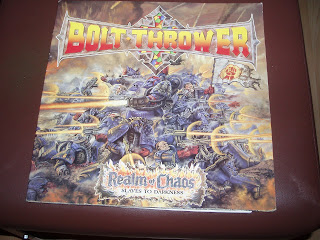 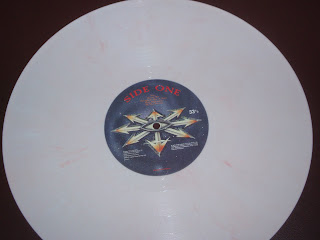 I've sold and traded plenty of records over the years and really regretted it afterwards and thought I'd never see some of them again. I'm happy to say one of them has finally returned home today. I first picked up a white copy of the second bolt thrower album for just 3 quid in the late 90's. The truth was that I only got it for trade but the motherfucker I sent it to never sorted me out anything for it and ripped me off. I then discovered how rare it was and started to wish I'd just kept it for myself. With the rise in prices for bolt thrower vinyl I thought I'd never see a copy again so I just made do with my black copy. Recently a friend was selling some stuff and mentioned that he had this and asked if I was interested. It only took a nano second to answer yes. Apparently 2000 were pressed in this colour which seems a lot but try finding one. One isn't even listed on popsike so I've no idea how much this would be worth. The black vinyl sells for a fair price alone.It doesn't matter anyway as I've no plans to ever get rid of this copy.
Posted by Mark-Sandwell at 12:20 No comments: 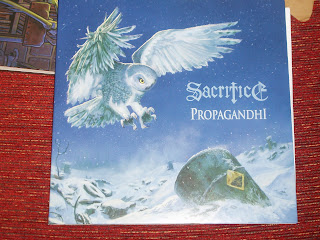 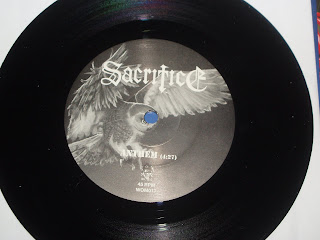 If someone had told me in the mid 90's that this split would one day happen I would have considered them mad. In fact it was still a huge shock to me a year and a half ago when I first heard about it. I'm not normally a fan of just cover version releases but I can make an exception for this one. It's frickin awesome. Sacrifice do 'Anthem' by Rush (a band I'm only just starting to appreciate and love) and Propagandhi do 'Technocracy' by COC. I think my copy is a second pressing. The first press sold out straight away but I don't know if there is any difference between the two. As I said just the very idea of this release blows my mind. I was really into Sacrifice in the late 80's as a metalhead and Propagandhi have come a long way since their fat wreck days (just check out their last album 'supporting caste'-almost prog hardcore punk, if there was ever such a thing). This thing looks as lovely as it sounds too, housed in a gatefold sleeve and the artwork incorporates both the old rush and CoC sleeves. Shame there wasn't colour vinyl but that's a minor quibble.
Posted by Mark-Sandwell at 23:12 1 comment: 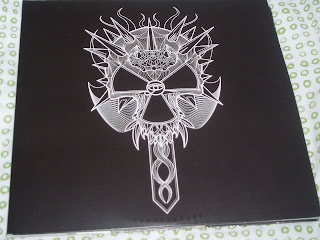 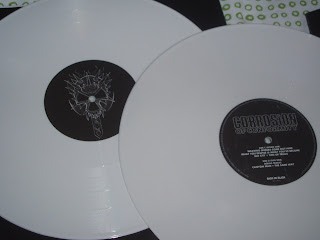 I hardly leapt for joy when I heard there was a new COC LP coming out. A couple of years ago I bought the 'your tomorrow' 7" on Southern lord and thought it was piss poor. It was closer to their 90's stuff (which I never liked) than their classic crossover era (animosity etc). Anyway a friend was going on about this new album so I decided to download it and give it a listen. To my shock horror I actually didn't mind it on first hearing and a few more plays later it really started to grow on me. I even like 'your tomorrow' a lot now (which is on this album). Yikes. Back in black records have put out this on double wax and some are on white-like my copy. It looks and sounds the bomb. If you're expecting 'animosity part 2' forget it. This is definately more of the stoner rock variety and dare I say it-NWOBHM like. Still I'm feeling this and that's all what matters.
Posted by Mark-Sandwell at 12:12 No comments: 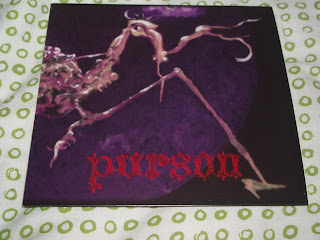 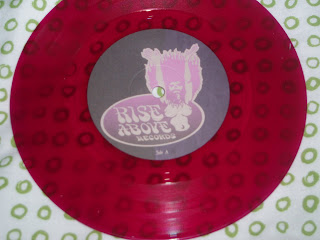 I saw London's Purson at the beginning of this year in my home town and was pretty disapointed to be honest. I had heard them prior via download and enjoyed those tracks but they didn't deliver live. Worse still, according to my friend, whose band played with them, they were a bunch of arrogant rockstar wankers with a complete prick of a tour manager. All they kept going on about that night was 'we've got a single coming out on Rise above'. Anyway I was surprised when it sold out on pre-order and even more surprised when my local store managed to somehow obtain a few copies. Basically the pressing info is 100 on clear (which I had no chance of scoring, maybe on ebay for an arm and a leg)250 on clear purple and 250 on black. I still picked one up knowing that if I had didn't like it then at least I'd get my money back off ebay. As it turned out I do like these two tracks. When I saw them in January I described them as a poor man's (or woman's) Blood cermony sans the flute. Even though they still remind me of BC, there's a bit more going on to describe them as a cheap knock off of another band. Who knows, maybe they'll achieve the same success of some of the other bands on the rise above roster. Selling out a pre-order vinyl release within a day or so is pretty impressive in this day and age especially when it's your debut release.
Posted by Mark-Sandwell at 06:52 No comments: