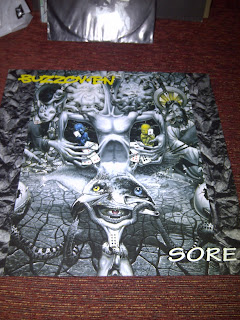 Another long time want removed from my list. I actually bought this on CD at the time and skipped the regular vinyl little knowing back then  that years later it would become a highly collectable item. Ah, the gift of hindsight. Anyway, Buzzoven were one of the first Sludge bands around. This was their big label debut (to Roadrunner). Knowing Roadrunner they probably dropped them when they failed to sell as many records as Sepultura-the guys who ran it were all about money. Still while Buzzoven may have never cracked the big time they were one of the pioneers of this style and have influenced many other bands. Members went on to play more angry and hateful bands like Weedeater, Sourvein etc. All good stuff!!!
This was in the batch of stuff that I bagged the other weekend and I'm pretty damn stoked to finally own it on vinyl. With a cover like that, it needs to be 12 inches big to be apprecaited.
Posted by Mark-Sandwell at 09:31 No comments: 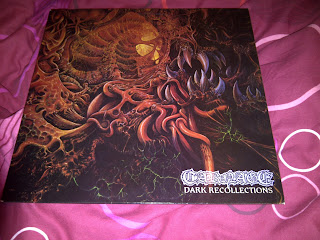 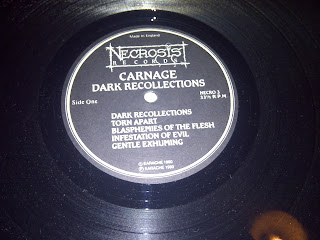 Last weekend an old friend called me and told me he was having a record clearout. There went my plan of the window with not buying anymore records this month. One visit later and my collection was slightly bigger and my bank account a bit smaller. I'm not complaining though, one thing that I've learnt over all these years with my record collecting habit is that if you see something you want and you can afford it then grab it there and then because especially these days it may not be around if you decide to hold off and try picking it up later,particarly if the price is more than reasonable.
It was a pretty good haul but one of the crown jewels for me was this LP-the first and only ever Carnage album. It's become of a bit of a holy grail for collectors of Swedish death metal as not only was it one of the first records to capture that trademark Swedish sound but also because members went onto other highly acclaimed bands such as Dismember, Carcass and Arch enemy.
It was released back in 1990 on Necrosis records-a short lived sub division of the mighty Earache records. It's a lovely item to have as this is from probably favourite era and genre of death metal. Listening to this reminds me why I have very little interest in what's going with the majority of current death metal these days unless they're playing it in a retro-style and you can't beat the genuine article-which is what this is.

Posted by Mark-Sandwell at 04:33 No comments:

Bad brains-I against I LP White 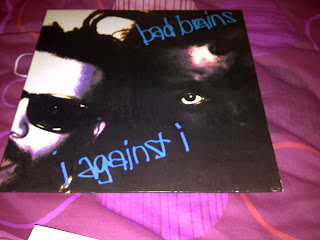 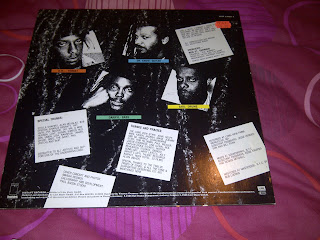 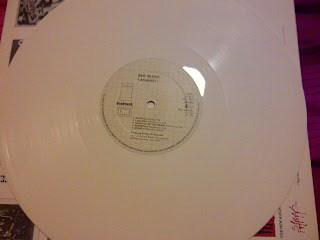 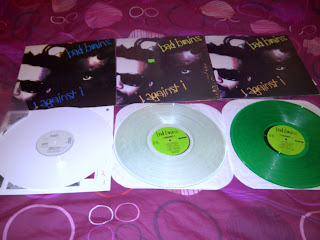 Picked this up in my local store last week in the second hand section which was a nice find. It's not the best Brains LP but by far the worst. This is a German Pressing on the Instant/Line records label. Line also did a white vinyl pressing of 'Rock for light' (Which I have a spare of, if anyone's interested). It is notably different next to the SST (blue lettering on the cover for a start). As I have the clear and green vinyl on SST already I decided to include a snapshot of the boys together.
Posted by Mark-Sandwell at 10:19 2 comments: 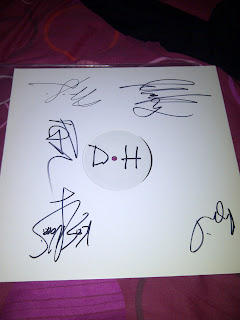 I've been with Darkest hour since pretty much the beginning-since they first dropped their first CD on Art monk construction. That shocked many at the time as that label was notable for really releasing only Emo-ish stuff.  Needless to say Darkest hour stood apart from the rest of the Art monk roster. They moved onto others labels such as East coast empire, southern lord and eventually Victory. It wasn't until 'Mark of the Judas' where I really got into the band. What a blinding album that is. I still need a clear copy of that one.
Recently I saw this on Ebay-a test press which is also signed by all members. Pretty much a unique item which I was pretty surprised that I won. Are the kids not as down with DH in 2012 as they were previously? Anyway I'm not complaining-my only gripe is that this purchase has made me realise how lacking my collection is DH vinyl. Damn, it all begins-again!!!
Posted by Mark-Sandwell at 06:17 No comments: 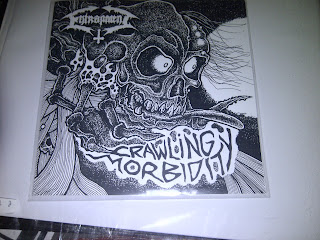 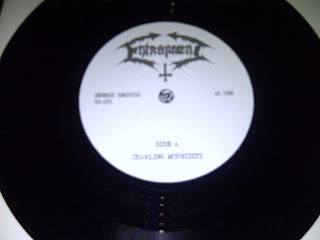 I caught Entrapment last weekend at the bloodshed fest. I'd never heard of them before and had my friend not recommended them to me about five minutes before they played I'd still be ignorant to their existance. It's safe to say they were the best 'surprise' band of the whole weekend.
They play old school death metal, a point their guitarist kept making when my friend talked to him 'Old school death NOT new new school' was what he apparently kept stating. It's most certainly that-with also a hint of hardcore punk in the style of  their delivery. Anyhow on the strength of their preformance I picked up this 7" on the soon to be defunct Detest records and on the strength of this record I'm gonna pre-order the debut LP.  Not sure how many of these there are but I'm guessing 500-1000 copies. With Detest records in it's death throes I can't see it being around too long.
Posted by Mark-Sandwell at 01:27 No comments: 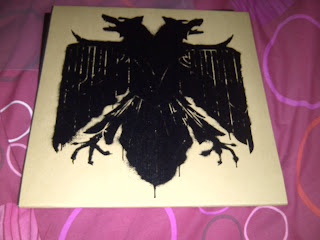 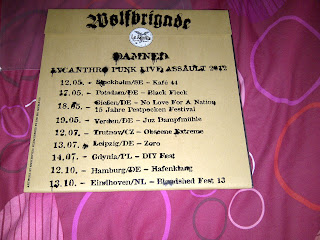 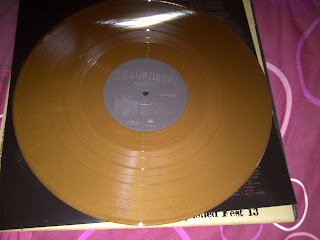 Yeah I know it's been a while. I had loads of trouble with this account for uploading photos (it's still shaky now!) and then my damn camera died on me. Anyway fingers crossed that I'm back up and running and can catch up with the shedload of vinyl I've picked up lately.
This weekend gone I was at the Bloodshed fest in Eindhoven, Holland. Great times!! I came back with my luggage heavier than when I went which is always the way with these things but hey-that's part of the ritual, right? Anyway  amongst the many other goodies that I acquired I picked up a limited tour version of the new Woldbrigade LP. It comes in a cool paper sleeve to wrap around the original one and it's on what could be the 'rust' vinyl that Southern lord were meant to send me before they cocked up another order (there's a surprise!!). I do like Wolfbrigade I must say. I've been a fan of their D-beat assault since the days they were called Wolfpack -in fact I remember going to see them at a near empty gig in Bradford at the 1 in 12 club in 1998. I was still blown away despite hardly any bugger being there. It's pretty mad to see how their fan base has grown over the years although unfortunately they attract a lot of idiots too so it seems. (Stupid drunken crusty assholes).
So this is their umpteenth album and it's what you'd expect-hard hiting and smoking hot.
Posted by Mark-Sandwell at 03:06 2 comments: