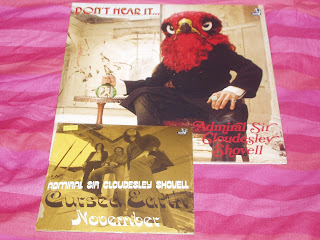 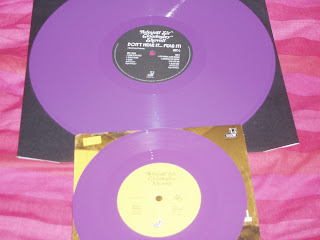 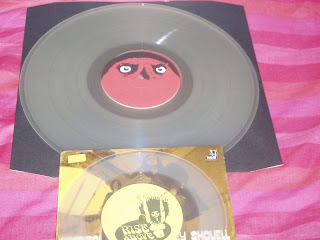 I've missed the boat on a a couple of rise above releases which shows how high in demand their more limited versions are (usually the clear vinyl or die hard ones). I was determined not to miss out on this. I even stayed behind later at work so I was next to a PC when they hit the webstore. The ironic thing is unlike the other releases (like the uncle acid & deadbeats repress on clear which sold out in minutes) the most limited version (on clear, out of 100) was actually still in the store the next day. Needless to say it's gone now and commanding daft prices on Ebay but at least I managed to luck out this time.
'Amazing' is how my mate described this album and I'm not going to argue with him. It is exactly just that. 70's style rock with a really dirty, gritty edge. Rise above don't half release some high quality stuff.
The diehard versions came with a bonus 7". As already mentioned 100 were pressed up on clear and another 300 on purple. I only actually ordered the clear version but some of the purple ones got into the UK stores and my local record shop got one I decided to grab another copy. It actually was cheaper than Rise above and that was even before they added their overpriced post charges onto it. I don't mind owning another copy of this superb record and even the purple is sold out now.
With a mouth watering menu of future releases lined up on Rise above (like the orange goblin represses) I'm hoping I'm back on the ball and ready to grab them too.
Posted by Mark-Sandwell at 23:49 4 comments: 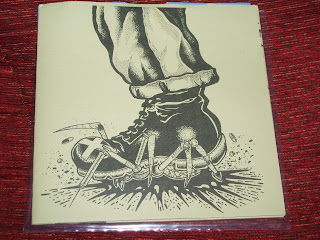 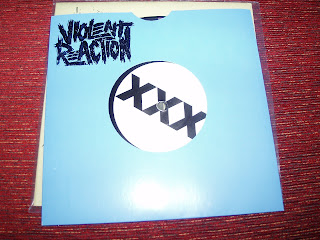 Okay I know I've been slack of late. For some reason my camera wouldn't connect with this blog. Anyhow it seems sorted for now so let's get on with it....
Last week I went to see Violent Reaction in Manchester. Hailing from Liverpool, Violent reaction started as a one man sXe project but has turned into a proper band. The demo got loads of hype and many folk I know were banging on about it saying it was some of the best old style hardcore next to the Boston strangler (and you know how hot that band is at the moment). Even Nick Royles made a surprise appearance at the gig last week in Manchester so it must have been huge. Anyway after I was convinced-Violent reaction are the real deal and THE shit. Also it was the record release show for the band's debut 7" and all the copies on sale were sold out even before the first band played. Damn, that's impressive especially in this day and age.
So this record then. It's a co-release between Quality Control and Static shock records and I believe this first press is limited to just 326 copies. I can't see them lasting too long. If you like your hardcore with bite then this is well worth picking up. No limited colour of vinyl (I bet there will be on the next pressing) but I believe there are different coloured variations of the sleeve. Personally I'm not assed about that at the moment. It's just good to have a copy. Play this fucker LOUD!!!!!
Posted by Mark-Sandwell at 11:20 1 comment: 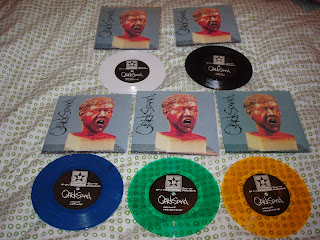 One of the many recent represses from revelation records is the first Quicksand 7" on green. Although I was a fan of the first album (not so much with the second one) this is still my favourite Quicksand release. Revelation wasted no time in marching into the 90's with records by bands like this along with others like Burn, Inside out and Shelter. This ushered a new era in hardcore. The youth crew orienated hardcore of the late 80's seem to suddenly become a thing of the past (until the revival). Quicksand featured Walter from Youth of today and Gorilla biscuits-which I found ironic. What was that line about 'coded messages in slowed down songs'?
Contridictions aside, this was and still is a storming record-heavy , hard hitting yet big on groove.
As this post was originally meant to be about the aforementioned green vinyl repress  but I decided to dig out my other copies of this record since I have all the colours. There's the first pressing of black and the limited version of white (to 1000) and then around 2001-2002 Rev decided the 'final' press (yeah right!) would be on gold vinyl (300 copies). Skip forward to last year's record store day and a blue vinyl version was pressed up for the day. There were 1000 of these I think-and there were two different varients of the same colour. I only bagged one. And now we have a green version. Of course I'll grab the next colour whenever it surfaces. You can never own too many copies of this record.
Posted by Mark-Sandwell at 23:57 2 comments: 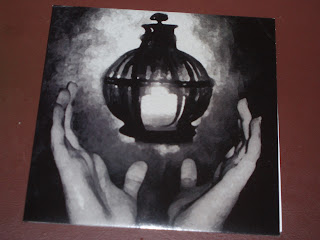 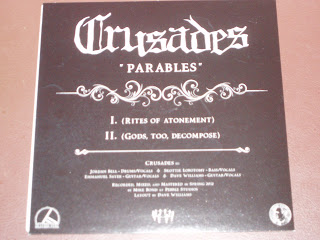 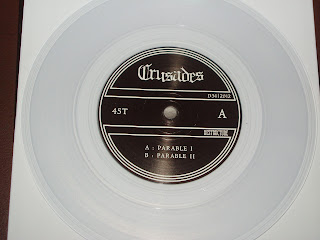 ‘The sun is down…’ by Crusades was my favourite album of last year hands down.  It’s hard to describe how awesome that record is. Dark sounding yet melodic punk with an strong anti-religious slant. These two new tracks on this released by Destructure records continue the tradition yet musically sound  more mature. Here’s a band that’s constantly improving. As great as that debut album is you still feel the best is yet to come.  I got lucky with this release as I only checked the Destructure website to order the Hark but was stoked when I saw this was up for pre-order. First 100 on clear.
Posted by Mark-Sandwell at 00:20 3 comments: 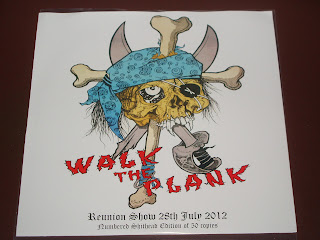 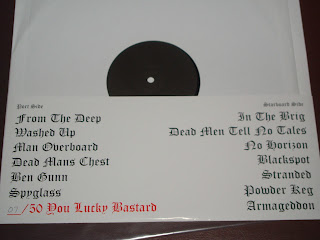 I’m doing a Marcus i.e posting about a record that was only available at a show which I never attended. The show was Walk the plank’s latest final gig ever (until the next one) which held in Livepool the other weekend. In fact I missed their other last ever gig too in 2007 which was held on a boat. I did however see the bands a few times before then and I did catch the first reunion show this year at Morrowfest in (which was ace). I couldn’t make this one though but my friend Lee picked me up a special copy of their album ‘Dead weight in hostile waters’ which was on sale. Thanks a million dude.


Originally released in 2006 by (the now defunct) Dead & gone records, this was easily one of the best UKHC records of the 00’s. And next to Voorhees, Walk the plank were my favourite band with Lecky on vocals. This record is a beast.


This special reunion edition is limited and numbered out of 50 and features a Pushead spoof cover dubbed ‘shithead’. Pretty damn funny. It’s got me thinking that I still need a test press and  one with the ‘Save out of step’ cover.
Posted by Mark-Sandwell at 09:33 2 comments: