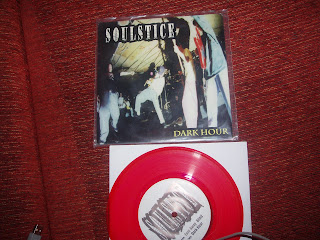 First heard this 3 track vegan sXe classic record back in 1995. I was well into Earth crisis and wanted to hear anything similar. I picked it up from a distro and was hooked upon the first listening. Raging chugga, crunchy hardcore with a HUGE metal edge. One of them is wearing a Slayer shirt on the cover which as mad as it sounds now was big news back in the day. Hardcore bands very rarely if ever wore metal shirts. And then at some point every hardcore kid wore a fucking metal shirt. Anyway apart from the sound and the politics that they had in common with Earth crisis they also hailed from the same place Syracuse, NY. They also did a CD called 'Raze the earth' which is damn good too but not as awesome as this. I only found out a few years later that this was also released on red vinyl so I put it on my wants list but it rarely pops up. Anyway one turned up on eGay recently and it had my name on it. Funny I've been listening to loads of old vegan sXe stuff recently. I may not be edge anymore but I am vegan so half of me is still true to the cause.
Posted by Mark-Sandwell at 12:57 No comments: