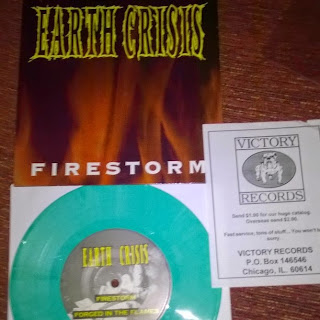 I know Earth crisis are a sore point with some folk and they certainly had a lot of people talking back in the day but I do regard this record to be a 90's hardcore classic. No doubt!! Face it where many of us went vegetarian when we heard Youth of today's 'no more' we took the next step and went vegan when ExC came along. Something I'm still proud of (and more important than being straight edge although being sober is something I'm pleased with too). Shame they went shit after their first album but hey at least they left us three stomping records with this being the best. Released back in 1993 by victory records, I always had a black vinyl copy as well as the CD with the bonus track but seeing that I'm on a bit of a 90's trip at the moment I decided it was time to man up and grab a green one. Limited to 220 so I believe and it looks fucking boss.
Posted by Mark-Sandwell at 07:53 1 comment: 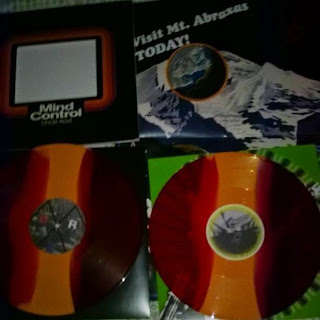 Last year I was gutted when I missed the all of the limited Die hard versions of one of 2013’s best albums-Uncle acid;Mind control. I had to settle for a regular copy from my local shop. Fast forward nearly 18 months later and I manage to bag one-only this is one of the ultra rare versions on tri-colour vinyl that was meant for friends and family of the band only. So rare that hardly anyone knew of it’s existence until a handful turned up recently in the rise above store-and to no surprise they went instantly. I've no idea how many exist. I do know that the other die hard colours are black (100), Clear (100) and purple (200). Those are still highly sought after so I shudder to think how much this would command on Ebay. It comes in a die cut sleeve with poster and a orange patch (to match the colour-the other editions did the same). It’s a sweet package and it’s good to be grabbing some of the good shit again from rise above after missing out on several recent releases.
Posted by Mark-Sandwell at 16:19 No comments: 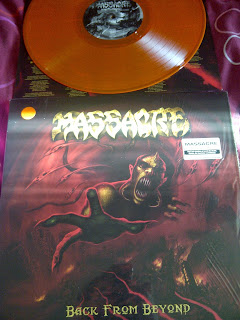 This weekend I finally caught Massacre live at kin hell fest in Leeds. It was a long time coming. I always really liked them back in the day and it was good to see these fat old looking guys crank out some fucking brutal and crushing death metal. I was lucky enough to pick up their new album too on orange vinyl. Freshly released by Century media, this sold out very fast but the band had some for sale on their tour. Limited to either 100 or 200. The cover artwork is a continuation of the one used on their 1991 debut 'from beyond'. Makes sense I suppose. So, is it any good? Hell yeah, it's great. Brutal as hell, these veterans haven't mellowed with age. If you love classic death metal then I recommend you seek this one out.
Posted by Mark-Sandwell at 11:54 No comments:

It's always nice when you grab a rare record at a gig for the fraction of the price it would cost you on EBay. It very rarely happens to me but yesterday I'm glad to say it did. So I was at the Kin hell fest in Leeds and browsing through a distro stall I came across this little beauty-an original pressing of Bolt thrower's classic 1994 album on Earache. This has recently been repressed by the label but as I tried to bag the most limited colour I got kicked out of their shitty site because more than 3 people were using it and when I managed to get back in they'd all gone. Rubbish!! I sulked like a four year old at first and then resumed my life as normal. An original black copy is better than one of their stupidly named coloured vinyl anyway ('blazing blue', gruesome green' etc, etc. This is mint too, looks unplayed. This is some of my favourite Bolt thrower shit so after years of just owning the CD it's nice to have the thing on original 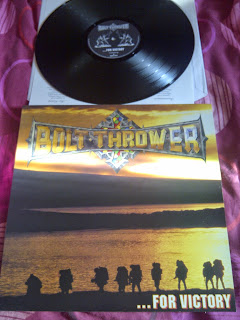 wax.
Posted by Mark-Sandwell at 00:22 No comments: 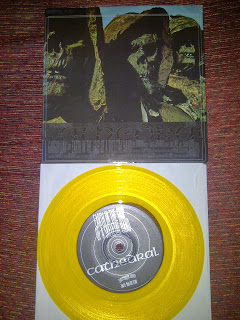 I've been a fan of Cathedral since I heard their first album back in the early 90's. They've done some great classic records and a couple of pretty patchy ones too but any opportunity to own a new piece of vinyl and I'm there. This opportunity came up recently when I bought a bunch of doom metal 7"s off somebody I know. The cream of the crop for me me was this 7" which was released by southern lord back in 2001. I love this 7" for a number of reasons besides the two songs which are awesome and are Cathedral doing what they do best. First up on the front and back cover is a picture from one of my all time Spanish horror films 'Tombs of the blind dead'. These skeletal fiends in the pic are known as the Templars and this film and it's sequels are amazing. I urge you to check them out if you love creepy 70's Euro-horror. Also sweetening the package even further this is on beautiful gold vinyl (limited to 100). After acquiring I've learned there is a blue vinyl also limited to 100. Since I own the regular black vinyl it makes sense to chase after a copy of that. The fun never ends.
Posted by Mark-Sandwell at 01:02 No comments: 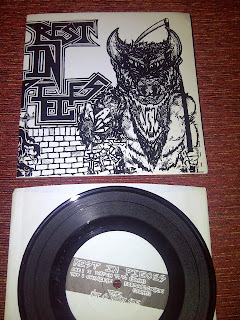 I know I don't post on here much these days so it's always sweeter that whenever I do that it's a big item that's been on my wants list forever. This is one I've let slide over the years and it's increased in value. If I had bit the bullet years ago it would have been cheaper but I'm not grumbling especially since this copy is mint. Quite something for a record that came out in 1985 on Icarus records. This is classic raw and in your face NYHC long before the likes of Biohazard and 25 ta life came along and made it a dirty term. This was the first release from the band that featured Armand from Sick of it all and would go on to do two albums (the classic'my rage' and the awesome but more metallic 'under my skin') Bloody awful cover art though...but that still doesn't stop me being stoked to finally add this to my collection. It reminds me how much I still love 80's NYHC.
Posted by Mark-Sandwell at 11:31 No comments:

Dinosaur Jr-You're living all over me LP Newbury Comics edition. 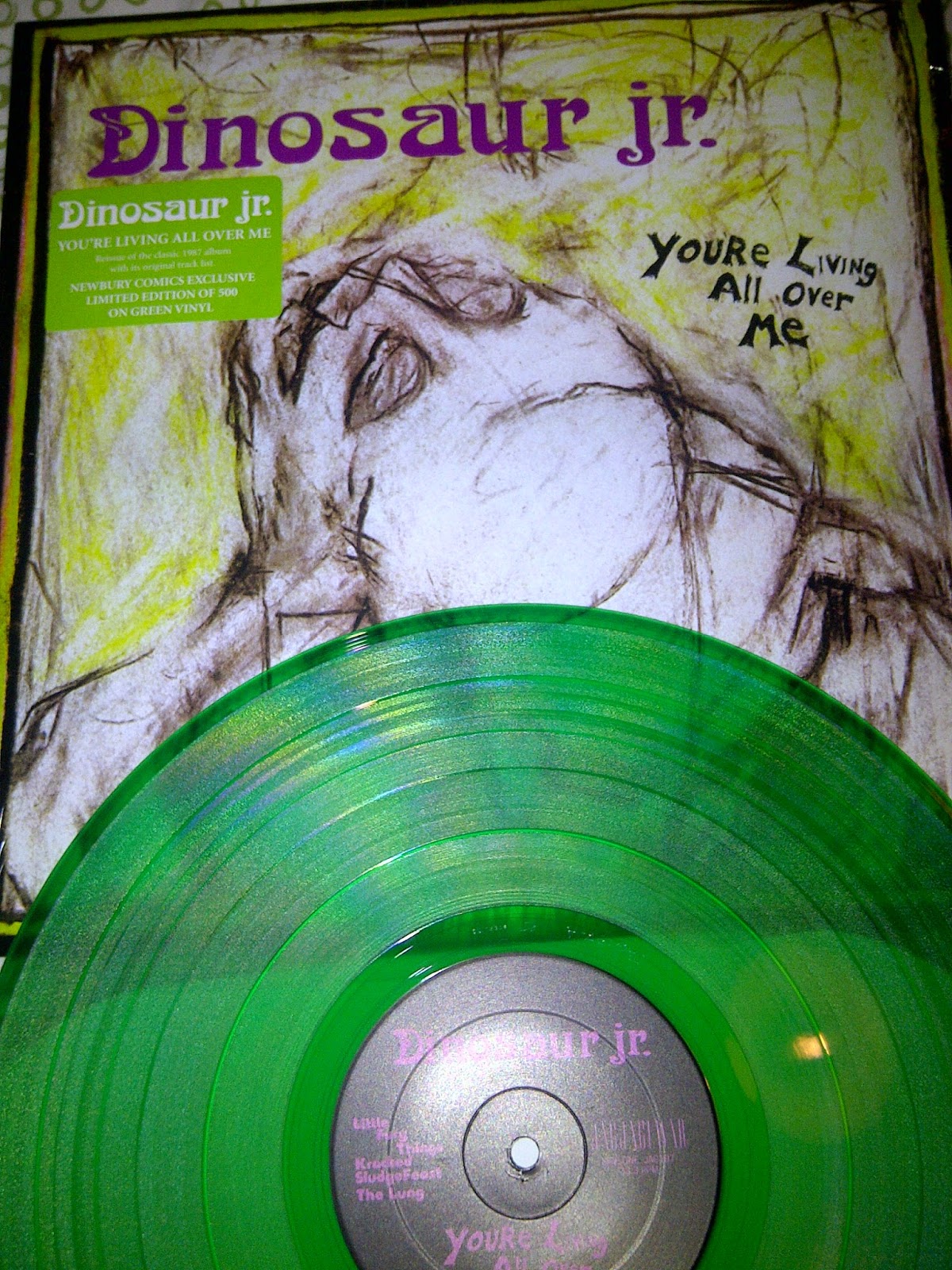 Like Marcus, Dinosaur Jr are a band that I've loved for a long time. Sometimes I even forget I'm such a fan-it's just like second nature. Although my Dinosaur Jr collection isn't as big as Marcus' (then again whose is?) I do like adding bits to mine whenever I get the opportunity. The first opportunity of 2014 came with this-a green vinyl pressing of their classic 1987 album that was only available from the legendary Newbury comics as an edition of 500 which went mega fast as you'd expect. While this isn't my favourite Dinosaur Jr album (that honour probably goes to 'bug') this is certainly one I love going back to and it has a more hardcore feel in places than any of their other stuff I reckon. This marks my third copy of this album and no, it's not enough.
Posted by Mark-Sandwell at 05:07 1 comment:

Parasite-Proof of the existence 7" Test press 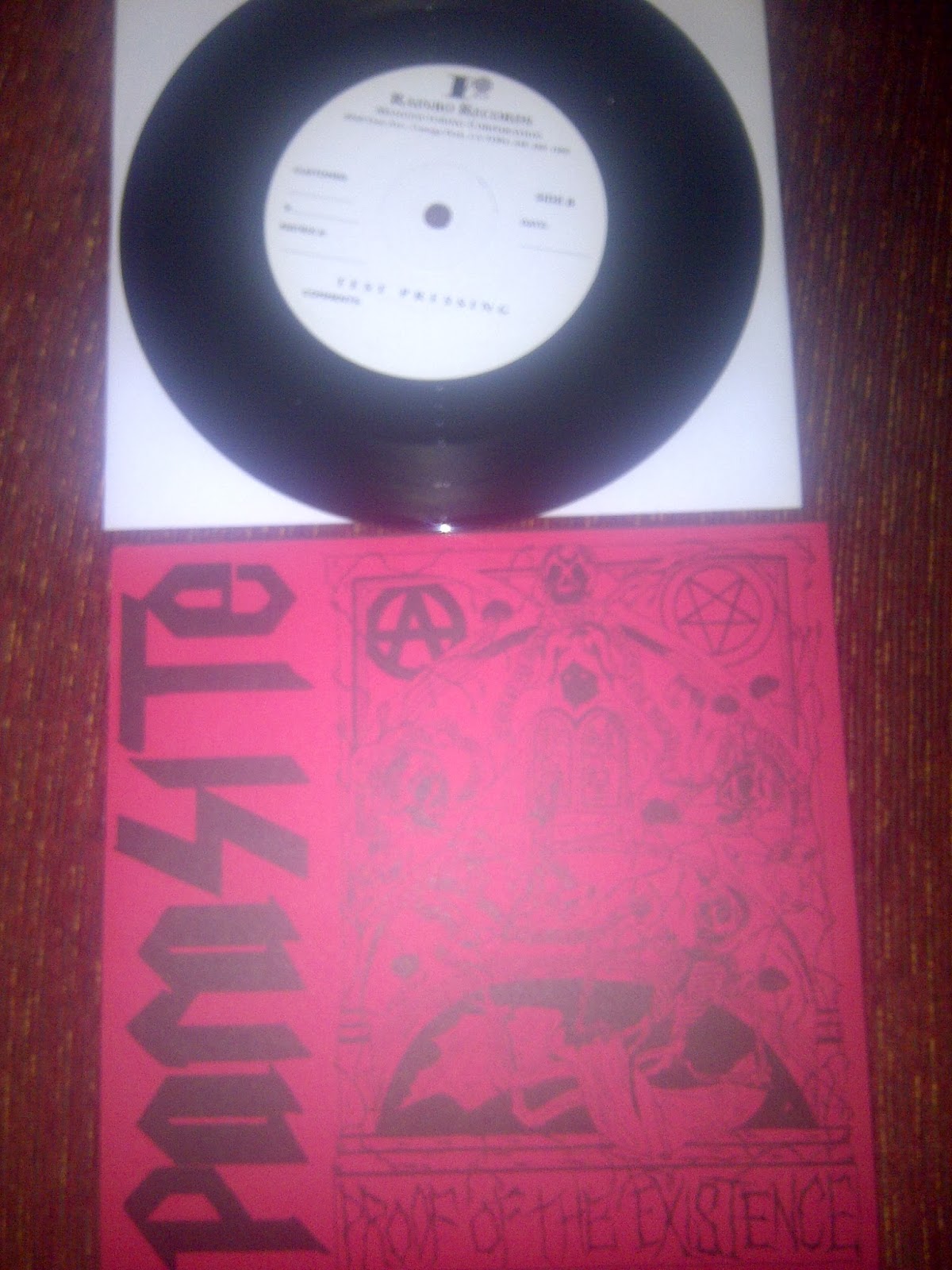 Annoying when you get hold of a test pressing of a record that you don't own a proper release for especially when you collect all their records anyway which is the case of Parasite and their new 7" on Holy terror, This is still awesome. Two tracks of a  hybrid of punk and metal.
Still I'm  happy with this as it's now the second Parasite test press that I own and I've got another on the way. Happy days.
Posted by Mark-Sandwell at 01:49 No comments:

Reason to believe-The next door 7" 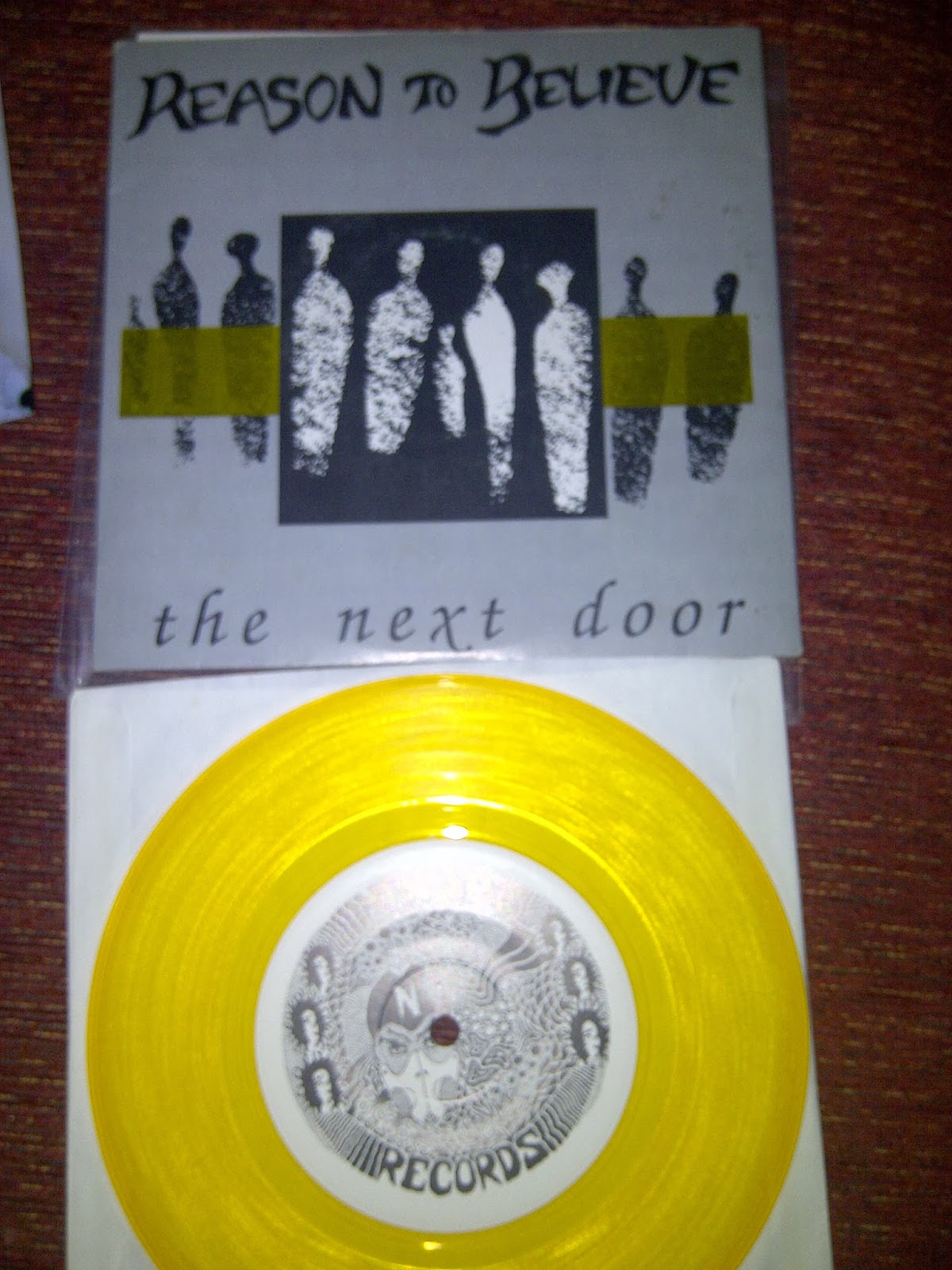 I'd actually hadn't realized that I didn't own this anymore until Marcus posted his 111th copy of this on his blog. I used to have it-where did it go? Anyway a friend and I were arranging some shirt trades and he brought this up so we sorted something out. It's a second pressing-I'm not bothered about owning a collection of Marcus's proportions when it comes to this record just yet but I did need to get hold of at least one version.
I'd forgotten that it's a really great little record. When it came out I was too busy getting blown away by all the Rev stuff like GB's, Chain of strength, side by side etc to really care that much about it despite owning a copy. Goes to show how you can sleep on something for so long. Guess I need a copy of their album now.
Posted by Mark-Sandwell at 07:58 No comments:

The Stupids-The kids don't like it LP Test press 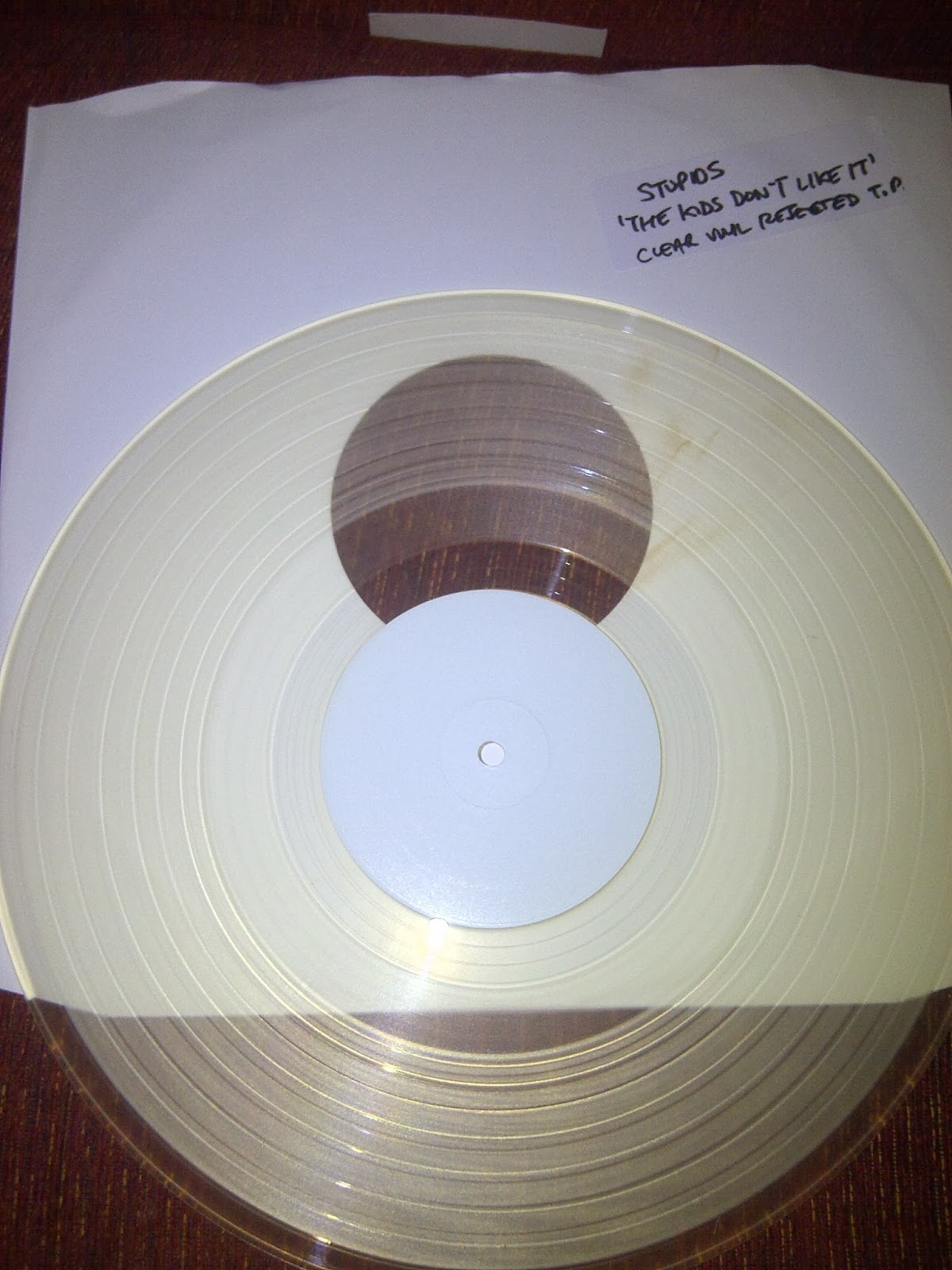 Ah, The Stupids. One of my all time favourite bands ever. When I first got into hardcore in the late 80’s, the scene was really big thanks to bands like Napalm death etc. While I dug the grindcore stuff I really related to the stupids because I was more into the US HC sound and so were they. In fact they even dressed and acted American (a cardinal sin in   hardcore punk at the time). I didn’t agree with all their daft (and sometimes dodgy) lyrics but musically they were the shit.
At some point a few years ago Tommy Stupid (after years of being a Drum & Bass DJ) decided to resurrect The stupids again (hey everyone else was doing it). Unlike a lot of reunions of old bands it wasn’t a disaster and their 2009 comeback album ‘The kids don’t like it’ on Boss tunage was actually rather fucking good.


I recently managed to acquire this test pressing of said album-this is the rejected version on clear. Only 5 were made. The original album itself was released on a clear with black splatter specks so this copy feels extra special despite no proper sleeve or anything.
Posted by Mark-Sandwell at 02:47 No comments:

Okay, I'm glad to see the back of 2013 for many personal reasons. That said, it was an awesome year for music. This list was done at the top of my head so I've probably missed loads out. For anyone who cares, here we go...

Best releases.
Plenty of superb records..like i said I've probably missed some out but here are some of the things that rocked my turntable and ipod the most...
Crusades-Perhaps you pass this judgement…LP (No Idea)
Uncle Acid-Mind control LP (Rise above)
Rival mob-Mob mentality LP (Revelation)
Violent reaction-city streets LP (Painkiller)
Hounds of hate-s/t LP (Painkiller)
Age of Taurus-Tortured souls of desperate times LP (Rise above)
Septic tank-the slaughter (Rise above)

Best gigs
As you can tell most of the gigs were local (I live about 30 miles from Manchester). No gigs on foreign soil last year...maybe this year?
Grand Magus-Manchester (Feb)
Dinosaur Jr – (Feb)
Violent reaction/Hounds of hate-Manchester (July)
Rival mob/Mind eraser-London (Oct)
Black Sabbath/Uncle acid-Manchester (Dec)

Best pick ups
Not a great year for ultra rare pick up's this year. I had such a great 2012 for that, it's almost like I had a quiet 2013 because of it, like my luck could only stretch so far. Anyway here's my favourite things that I got. Hopefully 2014 will be the year of some big scores.
Larm-orginal LPs.
No tolerance-No tolerance, no remorse Test press
Chain of strength-The one thing…LP Green