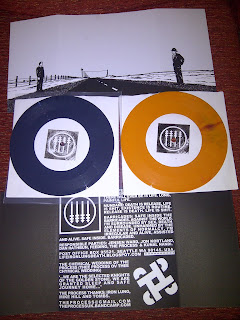 Okay, my first post in about a million years. Last week I went to see Iron lung destroy my hometown. I first saw them in Liverpool in 2007 where I first purchased a copy of this 7”. I say ‘purchased’ as it wasn’t actually out then but you paid for it, gave your address and a copy arrived about a month later. Punk rock!!!
I’d heard that this was getting a limited pressing for this tour so I was determined to get all the three colours as there were only a total of 165 copies. 67 on orange, 70 on purple, 28 on black. I knew the black one would be difficult to get and I missed out on that but managed to snag the other two copies. It looks great. Silk screened pull out cover. Really nice.  I love picking up tour only editions at gigs-it’s a great everlasting souvenir of a top night out and the fact it's a great pulverizing record doesn't hurt either.

Posted by Mark-Sandwell at 08:35 No comments: