Years ago trading records used to be my favourite past time but these days it's more of an headache than anything. The Hows your edge board is full of dickheads who just put their collections to show off with no intention of letting any of it go (it's TRADE board, Duh!!!). When you come across someone is actually willing to trade they normally want a ridiculously one sided deal. Anyway I recently got in touch with a good dude called Christian who is actually down for trading stuff on his list and gasp.. wants to do fair swaps. Amazing. Anyway his package turned up the other day and this is what was in it. 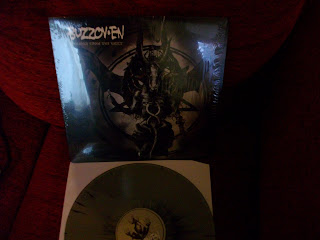 The new Buzzoven LP 'Violence from the vaults' on Relapse. Actually it's not new really as these recordings are from 1994 but have never seen the light of day until now. Really good shit. If you like sludge like Eyehategod then you need this. I have their other albums on CD, wish I had the vinyl. 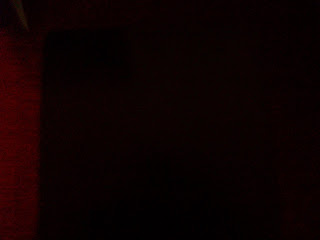 Also included was Corrupted's 'Pasor inferior' 12". I do own some Corrupted vinyl but not much, just a couple of split 7"s with other bands so it was nice to get this. It's a black embossed cover although you probably can't make that out in the above photo. Two long but awesome tracks of Japanese doom (sung in Spanish lyrics!!!). Side two is an hypnotic instrumental. 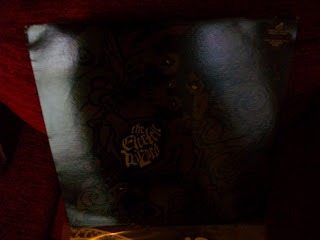 The thing I was most looking forward to though was 'We live' 2xLP on purple by Electric wizard (on Rise above records). EW usually commands high prices on egay so it was nice to actually get this without parting with a ton of cold cash. As with pretty much all of EW's output it's a beast of a record. And it looks nice on colour vinyl. 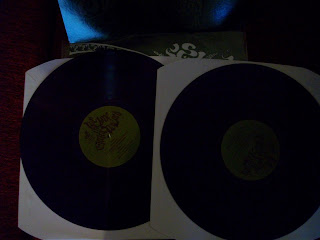 All in all a nice trade and I'm looking forward to doing some more with Christian soon. Cheers dude.

Posted by Mark-Sandwell at 04:20 No comments:

Down to nothing-Splitting headache 2x 7"

Collecting Down to nothing record can cause a spliting headache. They have LOADS out and that's before you start going into every variation of each relaese. So amongst the 800 records that they've made Speedowax put this out sometime around 2006 and they all went fast and I missed out. Speedowax was a UK based label that did pretty basic packaging with their records. As you can the labels are just blank with stamps. Nice colour of wax though. Looks almost good enough to eat although it's pretty best that I don't. Not sure how many there were all together but this is the Down to nothing press numbered 10 out of 125.So another DTN record to add to the pile of others that I have. 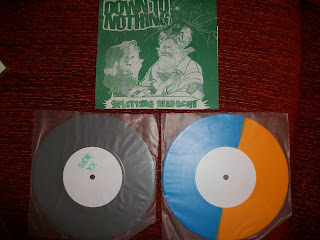 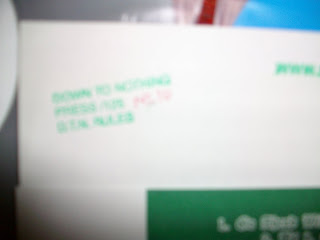 Posted by Mark-Sandwell at 01:41 No comments:

Ages back I bought a huge bundle of 7"s off a dude called Sam. He seemed like a nice bloke but seemed to take forever sending me the damn things. Anyway it took him over 3 weeks after I paid him to finally send me the goods and when he did there were a couple of things missing. So about 2 weeks later he posted the 7"s that he owed me but they never arrived. For some reason the package was returned to him instead of reaching here andhe said he'd re-send them but again, seemed to take forever in doing so. I was starting to think they would never come but this Friday they did, at long fucking last. So we go, first up is the Life's halt/No reply-split with the Simpsons piss take sleeve. How many alternate sleeves does this record actually have? I'm not sure but it's definately quite a few. Apart from the collector headache attached to it, this is a great record of straight up hardcore. I'm sure a Life's halt discography is well overdue. And lets not forget No reply, they were awesome as well. 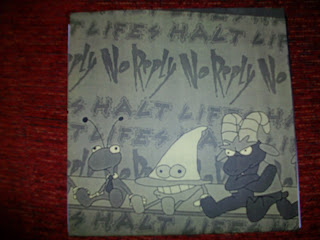 The other item was the 2nd Cops and Robbers 7" on white vinyl that Bridge nine put out a while. A cracking and overlooked slab of hardcore. B9 sure have a lot of critics and ok some of their recent releases may be a bit iffy (Crime in stereo are simply just fucking shit!!) but they've released some top stuff and this record belongs in that bracket. Not sure how many of these were pressed. Think it's something like 300. 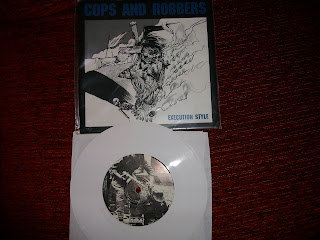 Anyway I'm glad these finally showed up. Sam must be pleased too, beacuse I've finally stopped hassling him.