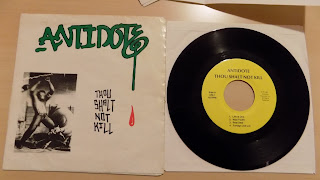 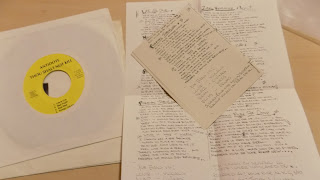 Here's my last big score from the end of last year. Classic record. The Bridge nine reissue is fine but nothing beats an original. Self released by the band in 1983 this is a pivotal piece of NYHC history.
I had been pestering  someone for this for a while. I decided to leave it for a while and one day I came home from work to discover a message that he had decided to finally sell it. It was destiny I guess. This goes straight into my treasure box and into my vault of hardcore history.

Posted by Mark-Sandwell at 01:32 No comments: 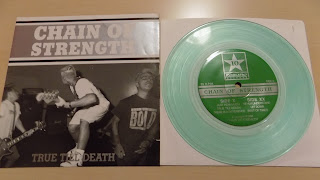 'I can't believe another year has gone by'. I say that on an annual basis and speaking of Chain, let's start the year off with a bang with one of my last and greatest scores of 2015-the silver sleeve version of true till death. One of the holy grails of sxe and highly sought after items from Revelation records colledisnctors. and another I never actually imagined owning. I'd be lying if I didn't say I think this is one of the absolute greatest 7"s of all time. It's everything hardcore should be-raw but passionate. The fact that they were a bunch of privileged rich kids from California without no real cares in the world doesn't come into it. This is the sound of youthful angst that anybody can relate to.
This is the third pressing. 500 were done on clear vinyl. 300 were sold on tour and 200 had a special silver sleeve made up. Legend has it that only a few got out via mailorder (or traded if you were lucky like Marcus) and the majority of them are still holed up at the rev warehouse.
It's funny because this is really tough to track down but at least three have exchanged hands for cash (including my copy) over the past few months. One of them was even on ebay. Usually these things pop for private sale.
Was it worth the wait (and money)? Hell yeah, it looks lovely and this is now one of the last big money items scrubbed from my wants list. It also completes my collection of this record so here's a group picture of the lads together. 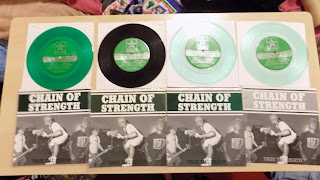 Posted by Mark-Sandwell at 07:01 No comments:

Another year gone by. Many great records, many great shows and some absolutely amazing scores. This was my 2015.
Best records of 2015.
Another great year for music. I’m hoping I haven’t left anything out but this was the main stuff for me in 2015.
No Tolerance-You walk alone LP
Into another-Omens 12”
Violent Reaction-Marching on LP (Revelation)
Chain rank-Against a wall LP
B Dolan-Kill the wolf
XRepentanceX-The sickness of Eden LP
Bitter end-Illusions of dominance LP
Horisont- Odyssey LP
Best shows of 2015
Some amazing shows. As you can see a very varied mix. Probably the cream of the crop was seeing war at BB King club in New York. I’ve loved that band for a long time and can safely say that it was one of the best performances I’ve ever witnessed live.
Necro-Manchester February
Eyehategod-Manchester June
B. Dolan-Preston September
Burn-London October
War-New York October
Obituary/Carcass-Manchester October
Pentagram-Manchester November
Best scores of 2015
My goal at the beginning of the year was to go after some major stuff and no doubt I accomplished that big time. It was expensive and my savings account got seriously dented but I don’t regret any of it. I never imagined I’d ever own some of these records and they’re way cooler and far more interesting to look at than a figure sitting in an account.  Here’s just some of the stuff I grabbed.
Judge-Chung king can suck it
Chain of strength-TTD 7” Silver sleeve
V/A-Together 7” on Orange and yellow vinyl
Abused-Loud & Clear 7”
Minor threat-s/t 7” First press
Underdog-s/t 7” on blue vinyl
Infest-1st 7” on purple vinyl
Antidote-thou shalt not kill 7" original
Posted by Mark-Sandwell at 08:41 2 comments: