There’s only three Earth crisis records in my opinion that are essential and this is one of them. It was originally released by conviction records in 1992 and then later repressed by Victory after the band got bigger. Someone gave me a first pressing about 20 years ago but I’d never bothered with going after a colour one until one turned up recently for sale. I’m glad I pulled the trigger on this one as it’s a really nice package. 300 pressed on green. Revisiting it again after many years it sounds very much of its time. This was before they went a lot more metal with ‘Firestorm ‘ (still their greatest moment) so it really does sound like a lot of hardcore from that period. In fact if it wasn’t for the lyrical content then it wouldn’t have been out of place on a label like ebullition. This record pissed a lot of people off at the time but I can get behind a lot of their lyrics and it rips musically so I’m proud to have it (as a third copy) in my collection. 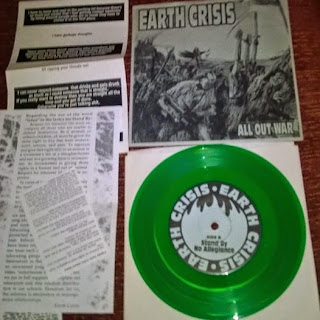 Posted by Mark-Sandwell at 09:43 No comments: