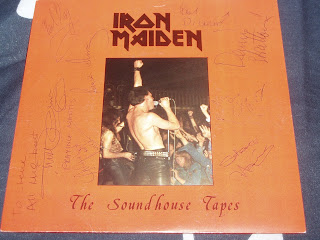 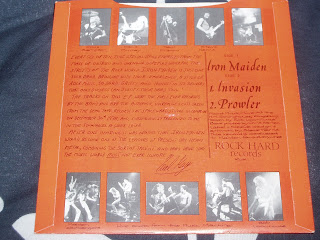 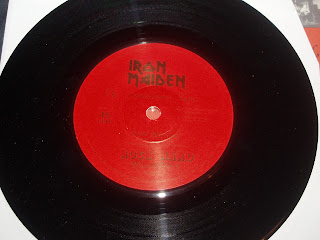 Where to begin on this one. This is by far the most expensive record that I have ever bought and definitely the most valuable thing in my collection. In fact they don’t get much bigger than this. The most insane thing about getting this is that I’m not really a maiden collector. I was big time as a kid in the 80’s but when I discovered hardcore I stupidly sold my collection cheaply to the local store (No Ebay then) and I still regret that now. Although I’ve no desire to aim for a complete collection again I still have a hard-on for the early stuff and this of course was their first ever record. Back in the mid 80’s this still went for big money-around £125+ which to a schoolboy over twenty five years ago was definitely out of reach. It was safe to say that apart from owning a crappy looking bootleg that I never envisioned myself owning a copy. Ever. Skip forward a quarter of a century later and I’ve finally managed to bag an original copy. Not just that but this was actually autographed by the band, some members of Praying mantis and the DJ for the metal for muthas tour at a gig in St Andrews, Scotland on February 3rd 1980. This is a real piece of music history. Not only that but it’s in great condition too which makes it even more valuable as the some of the copies I’ve seen go for big money have been a bit tatty. This is a bonafide original too. There are a lot of boots out there but having spent ages online on various fan and maiden record expert sites I’m convinced it is the genuine article. Verifying that fact was a chore in itself also was the actual purchase after I won this off eBay. The record was poorly listed and had a high starting price so after a retraction by someone else I ended up being the only bidder. However after the auction the woman selling this on behalf of her husband claimed he wasn’t happy with the sale and that it had started a domestic. She then tried to pull the sale but I wasn’t going to back down after finally getting this close. Anyway in the end she honoured the sale and sent the item. Just hope I’m not responsible for any divorces.


Of course Maiden fans will know the history behind this one-they recorded the demo in 1978 and in 1979 pressed this up independently on their own ‘Rok hard’ records imprint to give fans a taste of what was to come. They already had a following back then and the 5’000 copies went quick. That seems a lot compared today but back then when music was the main scource of home entertainment and vinyl was the main format it actually wasn’t. The tracks ‘Iron maiden’, ‘Prowler’ and ‘invasion’ have more of a punk feel to them than the versions that wound up later on their EMI records.

It feels almost surreal owning this item. Part of me feels that I should give up record collecting but we know that won’t happen. Although I’ve never really had a set limit to how much I would pay for a record I’ve certainly paid more for this than anything ever previously but all things considered I do believe that I got a bargain. The only thing is now that I’ve crossed a line who knows where I’ll go from here for shelling out for future rarities 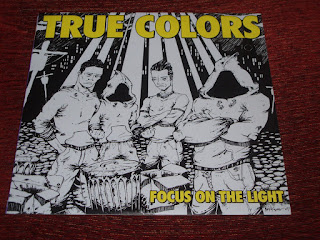 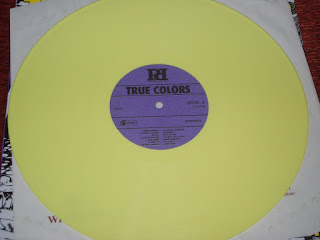 This has been a want of mine for some time. I got the very limited reissue of this on six feet under a few years ago with a different and very naff looking sleeve. I always really liked this cover anyway so grabbing an original on Powered records was a must. The reason I love this cover because it's just simplistic and almost cheesy looking sXe cover art but it works for me-I've always been a sucker for shit like that. It just reminds me of when I was a teenager having first discovered hardcore and how almost tribal it was to me after never really fitting in anywhere else and being an outcast-just having something I could relate to and feel part of. True colors were an awesome sXe band out of Belgium circa 2005-2010 who played straight up hardcore and did it almost to perfection. Unfortunately there's a lot more amazing European hardcore bands about which most people outside their home countries or regions won't hear about because they're not on any American labels. True colors were one of the lucky ones who did have an handful of releases out stateside and got the recognition they deserved. I've always missed this in the past because whenever it's turned up on ebay I've always gotten outbidded to the last penny or cent and it wasn't something I would have paid over the odds for. However good things come to those who wait and I managed to pick this up as a set sale for just £7. Originally someone beat me to the post but they flaked out and I managed to grab it after all. I'm pleased with this one-not only is the colour of vinyl very nice (I always prefer solid colour vinyl to clear coloured) but so is the sleeve-the letters are embossed, which is a nice touch. Oh, and the fact it's a fucking great record doesn't hurt either.
Posted by Mark-Sandwell at 06:51 3 comments:

Ah Record store day, the one day of the year that people actually visit record shops. Even more insane they actually queue up outside them. Unfortunately a lot of chancers see it as an opportunity to make some quick cash on eBay which not what it's about. Anyway this year's list of stuff was plentiful but while most of my friends were gunning for the Rev, Misfits and Poison idea represses, I had two other items also on my list. These two soundtrack 7"s. Most people know I'm a lifelong horror movie fan and of course I have an affection for the old British films of the 1970's so I was both surprised and excited to learn of these two releases for RSD 2012. First up is a 7" single with two tracks from the 1973 classic 'The wicker man' (fuck that remake with Nicholas Cage-what the fuck is that shit all about?). The funny thing is as much as I love the film I always thought the music was bloody awful but listening to these two tracks out of that context are haunting, sublime and pretty awesome. I could even see Rise above records putting this out. It's psychedelic folk to the max. Of course having Britt Ekland on the cover is a bonus. 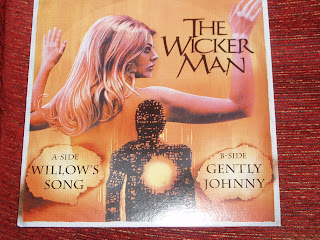 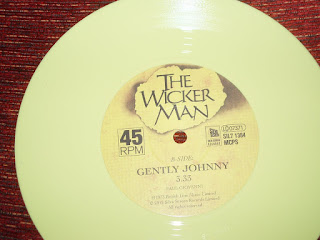 Next up is a 7" with music from both 'Dracula AD 1972' (My Favourite ever Hammer flick and released the same year as I was born) and 'The Satanic rites of Dracula'. This is a great release and great sleeve too. 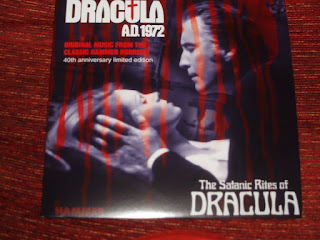 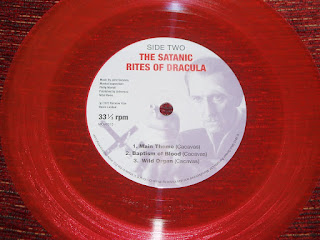 Cool red vinyl and numbered RSD sticker out of 666 (come on, it couldn't be anything else really). 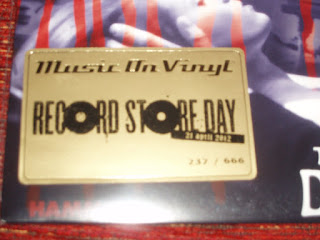 These two are already going for a bit on Ebay which is a shame because at least two of my horror film friends were really after these but couldn't make it down early (had I known at the time I would have picked up spares). Next year I reckon they should release the theme off 'Horror hospital' or 'Living dead at the Manchester morgue'. The chances are slim but wishful thinking never hurt anyone.
Posted by Mark-Sandwell at 12:10 1 comment: 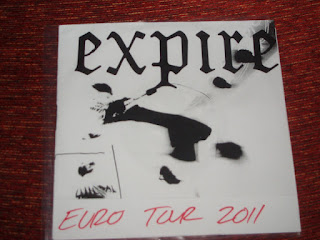 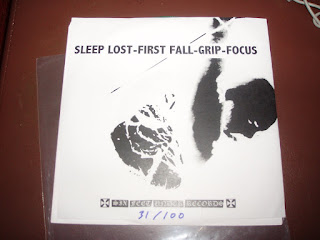 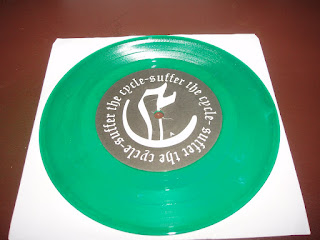 I was gutted when I missed Expire last year in Manchester (touring with Foundation). I had an operation the next morning so it couldn't really be done. I was also annoyed when I found out afterwards that there was a special version of their 'suffer the cycle' on sale. Oh well, not to worry that's what Ebay is there for. This was selling pretty expensive at first but thankfully it's come down a bit and I decided it was time to get involved. This has an alternative cover, is on green vinyl and hand numbered out of 100. This was one of those 7"s last year which really surprised me. Guess I'll have to pick up the second press on white vinyl now. Damn this collecting bug.
Posted by Mark-Sandwell at 13:09 No comments: 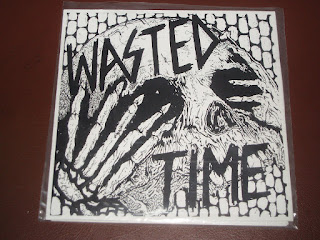 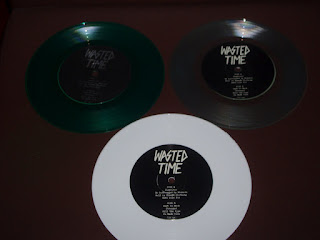 Jeez, is it really over 6 years since I first started ordering from Grave mistake records? I can't remember exactly how I came aware of the label but I doknow that in my first order was the first wasted time 7" (on white vinyl, 250 pressed) which was a split release with brain grenade records. I instantly liked it. Just straight up hardcore punk-no messing about. Of course that wasn't the last ever order from grave mistake I would make or the last ever Wasted time record I would get either. A couple of weeks I got an email from Alex?grave mistake saying he'd uncovered some old 7"s and two more colours of the first wasted time record were in there. So I grabbed a clear vinyl from the first pressing of which there were only 150 and a clear green one from the second press which there were just 200. They all look nice together don't they? This is still a ripping 7", even after 6 years it still sounds pretty fresh and still kicks ass.
Posted by Mark-Sandwell at 11:02 6 comments: 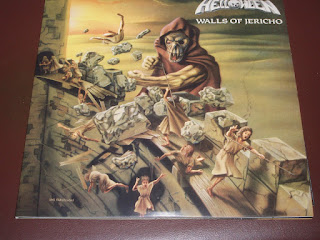 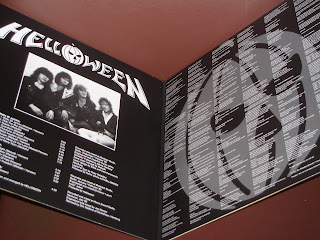 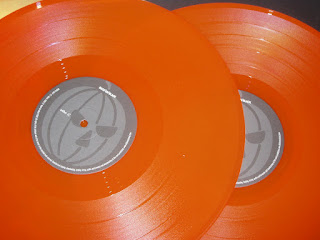 Yeah I admit it, I like some Helloween stuff. I already had a copy of this album but when I discovered that this double album repressing also featured the tracks off the mini LP (which I don't have) I was sold. Also there is a bonus track which was featured only on the 'Judas' 12" (which I do own0. I always loved the sleeve to this album, it's just screams 'European 80's metal'. Back on black have done us proud again. Housed in a lovely gatefold sleeve and orange vinyl, this looks the business.'Heavy metal is the law'!!!!Hell yeah.
Posted by Mark-Sandwell at 07:49 1 comment: 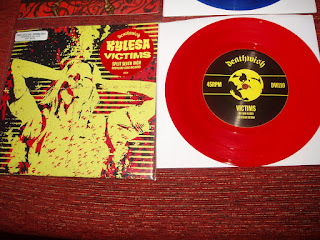 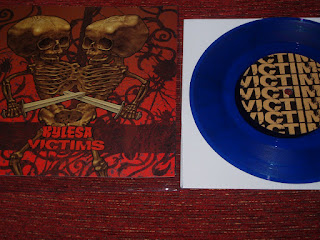 Last week I went to see Victims when they played with Black breath in Manchester and rather splendid they were too. They had two different versions of their split with Kylesa-the US one on Deathwish and the Euro release on La Famila. In my opinion the Euro version looks the best-on blue vinyl and with better artwork. I've never really understood the fuss about Kylesa to be honest. They don't suck or anything but they've never blown me away and their track on this record doesn't do a great deal for me either. It's a different story with the Victims side. Two ripping tracks to knock your head off. Worth the purchase just for them.
Posted by Mark-Sandwell at 11:32 No comments: 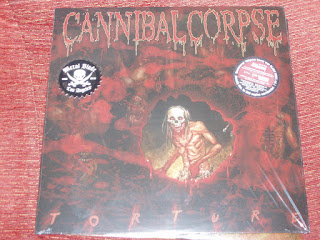 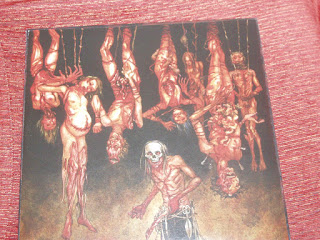 Cannibal corpse are always reliable. You know what you're getting with them-ripping death METAL and SICK lyrics and their latest opus is no exception. It's hard to think that these guys have been unleashing their brand of brutality on us for over 20 years. They can still outdo the majority of the young bands and the proof is here. Limited to 500 on black. I know there are some on colour vinyl with a 7" but I can live with this copy. Check out the inner sleeve artwork. SICK!!!!!!!!!!!!!!
Posted by Mark-Sandwell at 01:05 No comments: