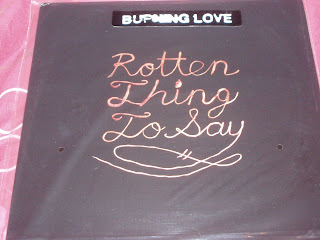 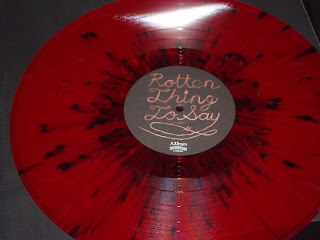 The curse of Southern lord mailorder strikes again. I placed an order recently and only half of it was right when it arrived. They certainly live up to their notorious rep and after half a week and a few emails later asking them to sort this out I still haven’t heard anything back…..useless!!!!
Anyway I’m pleased that the part of the order they didn’t stuff up involved the new Burning love LP on colour. I love this band and I’m aiming to get a big Burning love collection going (if anyone has any of their test presses for sale or trade….!!!) so I would have been miffed to miss out on this. Not sure how many were pressed on this colour. The stoned dude who does the mailorder at Southern lord probably doesn’t know either…
Musically it’s in the same vein as all their other stuff. Heavy but groovy. Chris Conlon’s vocals rule. This has already had plenty of plays in the ipod and has helped me get through the days at work this week so far. 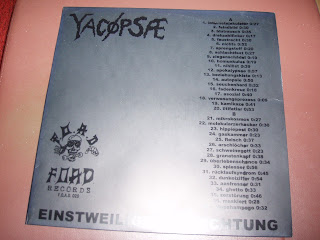 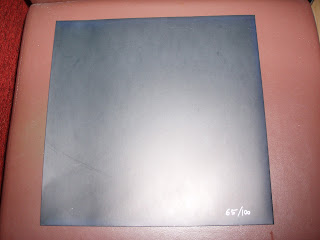 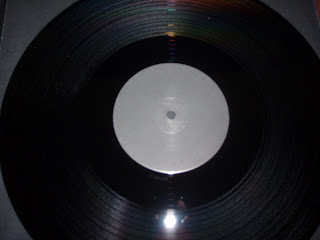 Chris Dodge's Slapaham records was and still is one of my favourite labels ever. I bought stuff religiously from the early nineties onwards because nearly everything he put out was a classic in the making (and definately is regarded as such today). Even towards the end of the label  in 2001 I was buying off him direct so I could get the colour versions (usually limited to 200 each). Thankfully he had switched to paypal (in it's early days before Ebay bought and took it over) so I didn't have to send dollars in an envolope via air mail anymore. Some of the very last releases were on CD so I ended up skipping them hoping they would get the vinyl treatment . Such was the case with this Yacopsae LP which did eventually-only years later on another label (FOAD records) as Slapaham folded leaving an awesome legacy and discography.
Hell,this is power violence pretty much at it's finest. Seriously this shit knocks off your head and shits down your throat. Shame it never got the same props as Crossed out, No comment etc because it probably wouldn't be out of place amongst the all time greats like such.
I'm not a fan of the most limited colour vinyl being on black (I'm old school you see) but in this case I can make an exception of this 'die hard' version-housed in a plain black embossed cover this actually looks pretty damn good. Only 100, all hand numbered.  Glad it finally made it out on wax, shame it wasn't by Slapaham but props to FOAD for unleashing this beast on us once again and at last on the format it deserves.
Posted by Mark-Sandwell at 12:04 No comments: 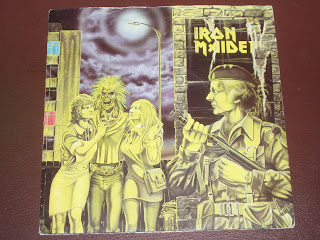 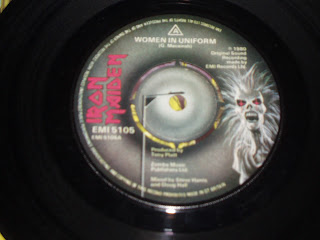 Sometimes you tend to find scores in the most unusual of places-okay it's not uncommon to find records at a hardcore gig but it's not that often you pick up early iron maiden records at a show-better still this was really cheap. I've droned on before about letting my iron maiden collection go in the late 80's but I still have an hard on for the early stuff (Paul Diano period). The artwork was amazing for those first records. Having Maggie Thatcher on the front certainly gives it a punk feel. Hell, it was more punk looking than most punk records anyway although Steve Harris swears they had nothing in common with it. Anyway a nice pick up. I want a copy of 'twilight zone' again next.
Posted by Mark-Sandwell at 00:29 2 comments: 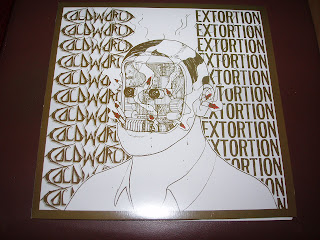 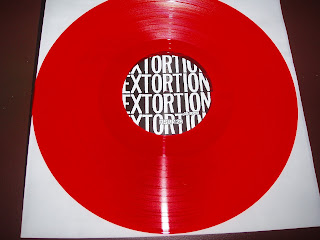 Another new record from Extortion. This time a split with the long running and long overlooked Cold world from Austria (not to be confused with the tough guy band of the same name). Both bands play full on raging shit. I'm ashamed to say this is the first time that I've ever heard cold world. Now I need to locate their other stuff.
I picked this up last week at the extreme obscene festival as the guy from RSR record had a stall. There are 100 on red and 100 on white which went to the bands to sell (and have gone already) with the rest on black. If anyone knows where I can find a download of this then please hook me up. I've had a search but come up short so far. 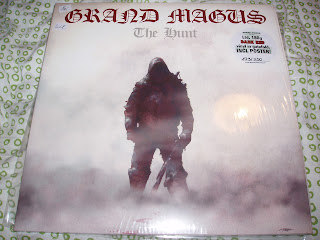 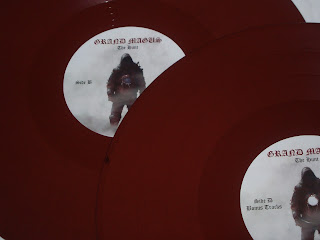 Grand Magus are a band that I regularly rock out to on the Ipod. I was going to wait until after my trip to obscene extreme and pick up this new album. As luck would have it, I actually picked up a rarer version while I was there, at a cheaper price than if I would paid for if I had picked up a regular version at my store.
This copy is on dark red and numbered out of 250 where as the normal release is on white vinyl (on Nuclear blast records).
Musically this band never let me down. It's the same catchy rocking shit they are famous for cranking out. I love his vocals and the guitar sound is awesome too. Truth be told I took a sneaky download of this a couple of months ago but I'm glad I've managed to bag a copy.
Posted by Mark-Sandwell at 08:28 2 comments: 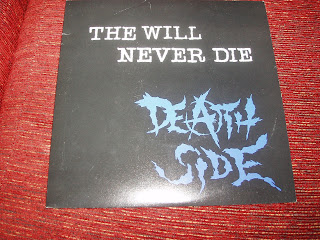 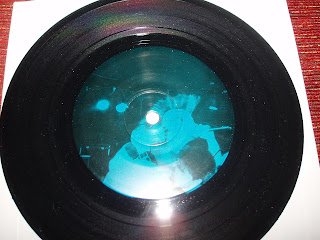 Another classic 90's Japanese hardcore record-the second Death side 7", released on Devour records back in 1994. 3 raging tracks that leave you gagging for more. I was lucky recently to acquire a big batch of this stuff but seriously, there should be more represses. Hell, I'd buy another copy of of this and other records if they were on colour.
Posted by Mark-Sandwell at 23:50 2 comments: 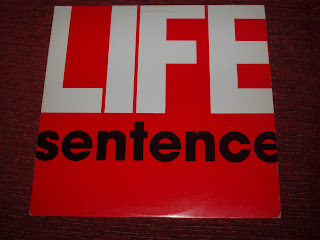 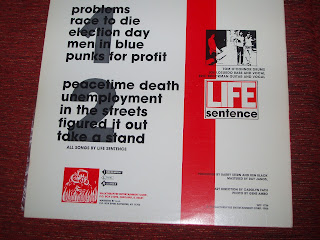 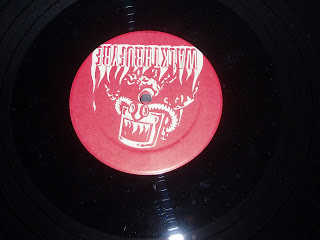 I haven't heard this LP since the late 80's and my memory of it was sullied by their second (and pretty poor) LP which I did own for a short while before selling or tading it on. Anyway years and years later I managed to bag a copy of this record which I had been meaning to track down for ages anyway. Although recorded/released in 1986 you'd think that it was at least 3-4 years older by listening to it. Fewer bands at that point were playing straight up fast hardcore as many were either going crossover (not a bad thing) or doing the post-hardcore weird thing (not good). Yet here were Life sentence dishing out the pure stuff. Despite Lar Ulrich of Metallica sporting one of their shirts they never did get the same recognition or interest as say, the misfits who Metallica also endorsed (and let's face it despite their already cult status the Misfits wouldn't become the enigma/legend/merchandise machine if James Hetfield & co hadn't have sported their shirts and raved on about them in the late 80's when they had already broke up). Even today this band remain largely overlooked which is a huge shame. Fans of straight up fast old school should be rocking it. Hell knows it's taken me long enough to get involved. That said, I'm still giving their second album a wide birth.
Posted by Mark-Sandwell at 22:05 2 comments: 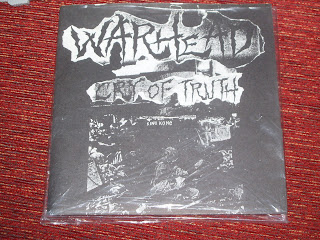 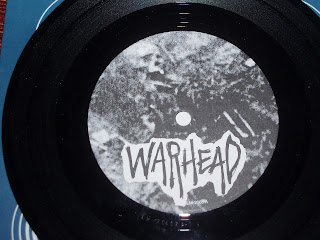 Last year I first got introduced to Warhead as they had a new release for the first time in ages. Seems I've been sleeping on this band. I was blown away but it's taken me a year to track down one of their older records. This was released on Amok records in 1991 and is a blistering full throttle attack on the ears (and senses). I have some catching up to do....not with just this band but with Japanese hardcore in general. I'm loving this shit at the moment.
Posted by Mark-Sandwell at 10:47 No comments: 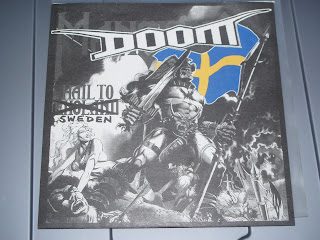 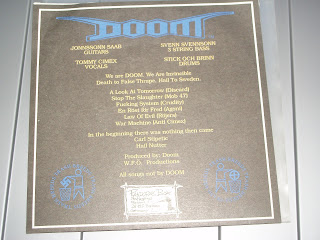 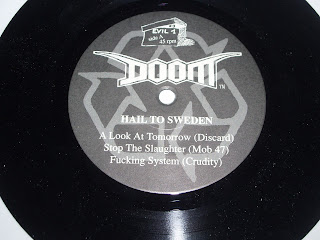 Another Doom record that I needed. I did have these tracks on a comp but wanted the original just just for completetion's sake but also for the terrific Manowar spoof cover as I skipped this when it came out for some unexplained reason. This was a ep of exclusively covers of  old Swedish hardcore bands.  Released by Pandora's box records out of Germany in the mid 90's-this was my favourite era of Doom.
Posted by Mark-Sandwell at 11:40 1 comment: 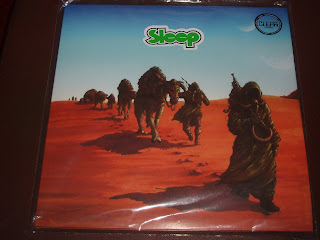 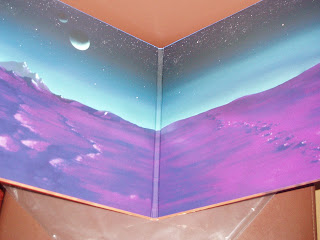 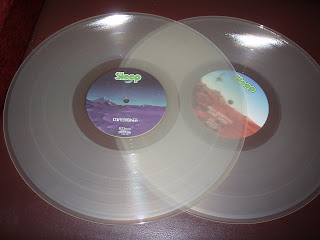 Timely re-issue from southern lord of Sleep's 1 song opus from 2003. It fills 3 sides while the fourth has a couple of live tracks thrown on as a bonus. Personally I'm more of a fan of 'Sleep's holy mountain' but this is still one for the collection and what a sterling reissue this is, with a lush gatefold sleeve, a small poster and thick double vinyl. This clear version is exclusive to Europe and is limited to 2000 which is a pretty big number for vinyl in this day and age. I managed to bag this from my local record shop which saved the hassle of mailorder etc which is always good (although most of my records do come from mailorder). Yep, good job with this one. Looks and sounds the business.
Posted by Mark-Sandwell at 06:15 No comments: