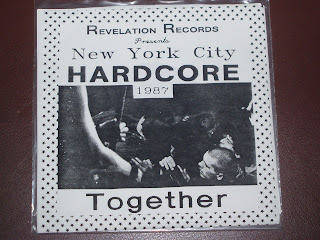 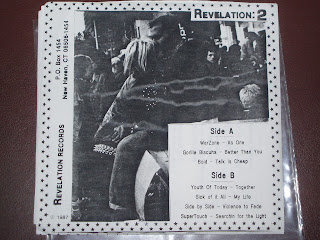 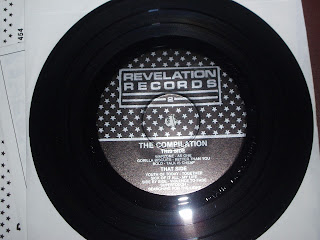 It’s been a good albeit expensive year so far for me with record scores. Scratch that, it’s been fucking awesome as I’ve managed to bag some of my all time wants, this being near at the top of the list.  Although my Revelation collection isn’t quite as majestic as Marcus’ I do own quite a few goodies myself including all the early releases although ‘Together’ was always the one that eluded me. Back in the day, when Rev releases were readily available in stores (those were the days!!), ‘Together’ was always hard to get. In fact I never even saw a copy anywhere, ever. The only two times I nearly came to own this were 1996 and 1997. The first one was with a guy who had it who didn’t even like this type of stuff. He kept me dangling for ages whether he would part with it or not and then said he was keeping it. Then the year later he traded it someone else. The second time was when someone had it for sale and as I was buying some other stuff I couldn’t afford it at the time and when I went back to for it, it had gone. Damn. I still curse myself for being such a dick.


So 15 years after that and 23 years since I first decided that I had to have this record I have finally grabbed one. I’m not sure what pressing it is but I don’t care. It’s just good to have one. I’d love a colour one but I’m more than happy with this at this stage. Maybe in another 20 odd years? Actually I shudder what to think any pressing of this will be worth by then.


This could be the perfect compilation for me. I was so into (mid to late 80’s) NYHC as a kid it was unreal and I’ll always have a deep affection for stuff from this era. I had no interest in what NYHC supposedly became in the 90’s with shit bands like Biohazard, 25 Ta life etc. Fuck all that tough guy nonsense and all the crap bands that were influenced by it.


Anyway I digress, back to this comp-Hell, even Supertouch sound decent on here and nearly everyone knows that I can’t fucking stand them. Warzone, Youth of today, gorilla biscuits, side by side…? Man, that is THE shit as far as I’m concerned. This will joining my other Rev releases in my special boxes.
Posted by Mark-Sandwell at 09:40 6 comments: 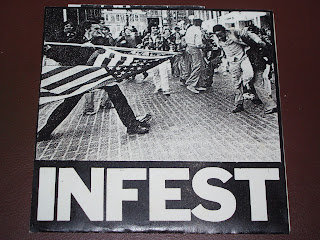 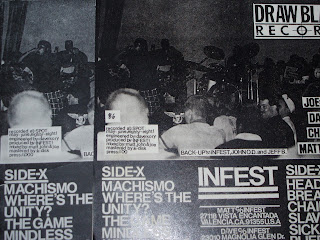 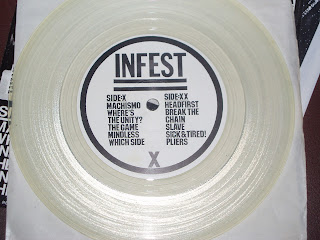 In this sometimes often nitpicking, elitist and snobby little world we call Hardcore, Infest are one of the few bands that appeal to the majority of the sub genres and sub divisions contained within it (pop punk and Emo excluded of course). I mean there’s not many bands that Grindcore fans, Crusties, power violence kids and Straight edgers can mutually share their love for but Infest have always seem to achieve that remarkable feat. I first got into Infest back in the early 90’s with their 2nd and then their ‘Slave’ . Despite having a basic bootleg it was 1997 until I finally picked up an original of their first on draw blank records. I thought it was a huge deal at the time. I guess it was, really as everyone was after that record. I never envisioned owning a clear vinyl (or a purple one). Even back then it seemed like a pipe dream so I never even bothered attempting to track down a copy and if the offer hadn’t had come to grab one this week I probably never would have ever tried to get it.


An old bud announced on facebook that he was selling some of his stuff. Since this guy has been around forever I suspected there would be some real gems in there but I never expected to bag this. Typically it was the most expensive thing on his list but still considerably cheaper than the $380-580 that it commands on Ebay on the rare occasion it does actually go up for sale. Actually this guy I got it off used to sell copies of the for the band here in the   back in the day so they gave him a clear copy for his own collection. Just 100 of these on this colour. There is a difference between the sleeves, my regular copy comes in a paper sleeve where as this one is card. Also on the back cover, the regular copy just says ‘Press;1000 ‘ and this one says ‘press; 100; and is numbered. I’ve compared the two in the middle photo above.


The guy didn’t want to sell on ebay as he wanted it to go to a good home, well it certainly has. More like a high security prison actually as there’s no chance of this bad boy breaking free.
Posted by Mark-Sandwell at 23:41 1 comment:

In the woods-HEart of the ages 2xLP Test pressing 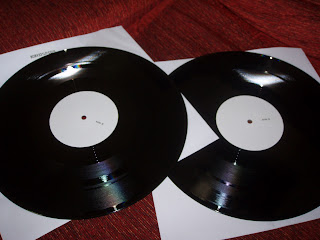 I used to like a bit of Black metal in the mid 90’s. Actually it had to come out of Norway otherwise it somehow didn’t feel authentic to me. This was just after the murder of Euronymous by that Burzum dude. For a short time it did really feel pretty evil. Of course this was before black metal became acceptable by the hipster wankers and for the most part it was shunned by nearly everyone except a few die hards-even the majority of the rest of the metal community seemed to keep their distance. Anyway truth be told I rarely listen to much of that stuff anymore but two albums I always seem to go back to are ‘battles in the north’ by Immortal and ‘Heart of the ages’ by In the woods.


Actually this strictly speaking isn’t what a lot of folks classed as pure black metal-sure this lot were from Norway and certainly had their roots in that scene and had at times certain parts in their music which could be definitely considered as black metal sounding but there was a lot more going on. I remember listening to this for the first time and knowing that I tuning into something unique and very special. The opening track was proof that this was going to be a rich and progressive musical journey. By the time the band had done their second album (‘Omnio’) the black metal influences had pretty much vanished altogether. That’s one album that’s still nearly impossible to categorise to this day.

So back to this album-I just had the CD but always fancied the vinyl but never seemed to track down a copy for a reasonable price. Of course, it’s gone up in value so the chances of me picking one up without paying through the nose are pretty slim. I caught this test pressing on the bay and decided to jump on it. Often outside of hardcore (sXe in particular) test pressings don’t seem to go for as much, odd that! So I got this less than half of the going rate for the original on misanthropy records. Only this is actually a repress by back on black that hasn’t been released yet. I’m not sure how many this is limited to but I’m guessing around 10-20 copies being a UK issue. The sheet with it says that it’s on purple vinyl but this is black obviously. Hopefully this will turn out to be the only black vinyl version making it super rare and exclusive. That said I still want the regular double vinyl (whatever colour it comes out on), for the packaging etc. And damn it I still want an original.

I still get goose bumps listening to this now. 16-17 years later and it’s still some mind bending shit.

Posted by Mark-Sandwell at 03:19 No comments: 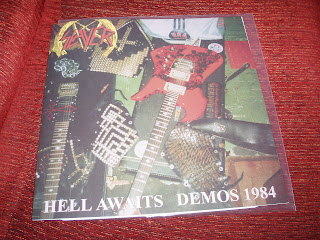 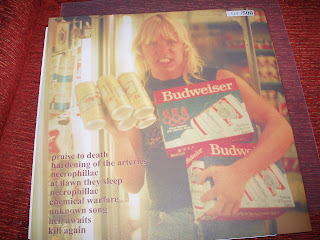 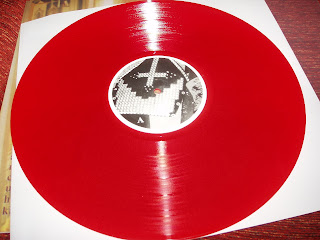 Must admit I’m finding the new blogger set up a bit of a pain in the ass.  Anyway onto interesting topics-namely a new Slayer demos LP. A bit ago a ‘Reign in blood’ demos  bootleg album turned up. Now someone has wisely decided to unleash a ‘Hell awaits’ one. I know people who actually regard ‘Hell awaits’ as their favourite Slayer record. For me it’s the unholy trio of ‘Reign in blood’, ‘South of heaven’ and ‘seasons in the abyss’. I never really got into ‘Hell awaits’ as much, partly due to the production. I always thought the songs sounded great live though. So this is raw although the quality isn’t actually too bad at all. It’s really one for the Slayer die hards which I class myself one of.  My copy is on red and numbered out of 500. I know there are different colours out there but I don’t know if there are 500 of each or there are just total. I do know these are selling for pretty big money on the bay. Glad I managed to grab one at a regular price.

Posted by Mark-Sandwell at 08:12 No comments: 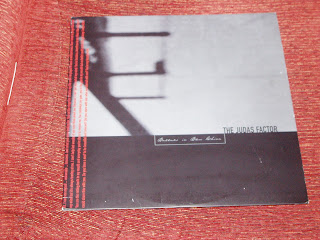 I decided to take a trip shopping yesterday in Manchester. I very rarely ever go in vinyl exchange never mind actually buy stuff from there as their prices are usually ridiculous and most of the staff are assholes too. In fact it annoys me that most other record shops are either struggling or folding and they always seem to be doing well. Where’s the justice?


So anyway I decided to actually go in and have a root around. Most of the stuff in the punk/hardcore section was stupidly overpriced but I did have joy digging this out for £5 and it was in their blue sticker sale with a further 25% off so for £3.75 I couldn’t complain.

For some reason I bought this on CD back when it got released in 1999 and skipped the vinyl, What a fool!!! This is only on black so I still need a colour copy.

I absolutely loved Rob Fish’s previous band Ressurection-they played a mesh of hardcore and metal that was kinda hard to put in either category. The Judas factor was an extension of that. This was some soul raging, abrasive noisy shit with Rob’s trademark vocals pouring the venomous icing on the already rotten cake. Listening to this album in 2012 it hasn’t lost any of it’s power. I’m glad I got this. I think a Judas factor revival in my life is already starting.

Posted by Mark-Sandwell at 22:22 No comments: