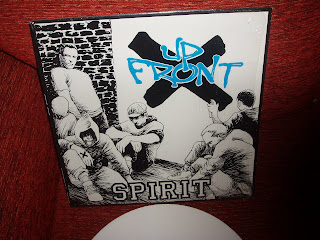 Anyone who knows me will know that I'm definately far from being straight edge these days but I still have a soft spot for a lot of the old school sxe/youth crew/posi HC since that was mainly my soundtrack when I was a kid first getting into HC punk. I always liked this album although I'd never put it in the same league as YOT, GBs etc but it's still a good album and I love that cover still. It sums up what I thought HC was all about when I was 17. I always had a 1st press but never had this, a 2nd press on white until now. When it popped up on ebay I decided to put a sneaky bid on it and it actually won. All I need now is a third press copy on blue. Anyone got one for trade/sale? 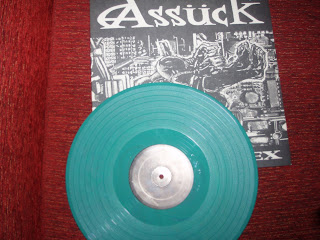 Wooahh!! This is perhaps the finest grindcore album ever. In fact to any grind band starting up I'd advise they study this album as a text book example how to do it properly. This is has been on my wants list for years. When it was released I opted for the CD version (duh!!) and before I knew it the vinyl version was sold out. And then I lost my fucking CD!!!!! Anyway fast forward a few years later and I've finally tracked it down, on green vinyl too. 100 were done in this colour and as you can imagine they're not easy to find, in fact it very rarely even pops up on ebay. I actually got it off a dealer for £7.50. Guess he didn't really know about this one. Not that I'm complaining mind you.

Posted by Mark-Sandwell at 09:55 No comments: