Six feet under can suck it!!! 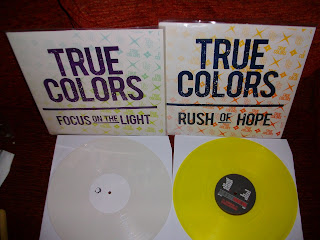 Ok about an age ago I pre-ordered the a special package with the two True colours LPs on colour and in special sleeves. Six feet under always take forever with pre-orders so I can accept them turning up late but however I can't accept them ignoring my instructions which I always state whenever I order a record; 'Please remove 12” record in inner sleeve from outer sleeve to avoid rips or tears'. But they didn't as a result the top of the sleeves have tears on them. I did email them and got a couple of pissy replies back and when I asked for replacement sleeves they didn't bother replying. Have to say these covers look fucking crap anyway but they look even even worse with tears on them. Thanks a bunch guys!!!
Posted by Mark-Sandwell at 12:59 No comments: 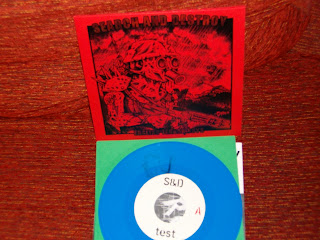 Marcus put this out back in 2006 on his Endless quest records label. It sounds like something from 1981.A good mixture of USHC and good old English oi!. There was a limited red vinyl pressing as well as the standard black and 50 of the black ones came with a Negative Approach rip off sleeve which were sold at the 2006 NA London show (where this lot played as well).
This is the most limited of them all, a blue vinyl test press which I scored very recently. As you can see my lucky number is 17. 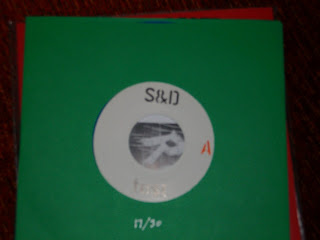 This is a top record. I'm sure Marcus has a few of the black ones left. If you don't have this then hit him up for one.
http://endlessquestrecords.blogspot.com/

Posted by Mark-Sandwell at 03:13 No comments: 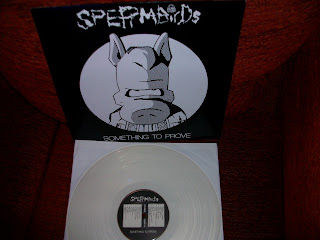 Ahh.. the memories. It was 1988, I was still at school and someone gave me a copy of this on tape and I've been hooked ever since. It still sounds awesome and for some reason isn't as highly regarded as it should be. If you haven't heard it, then you need to get on the case NOW. It's a classic. I just picked this up recently, the clear vinyl version on We bite. No idea of the pressing info but I had to have it regardless. One of my biggest regrets is passing up a test press of this years ago. What a dick!!!

Posted by Mark-Sandwell at 03:01 No comments: 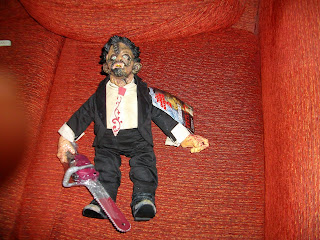 Treated myself to this in the play.com sale. Very nice.

Posted by Mark-Sandwell at 00:03 No comments: 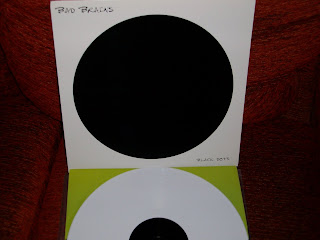 Yes I know it's been a while since my last post but I lost my camera. Anyway I decided to get a new and much better one and here's the first post that I've used it on.
Basically this is an add to the previous post (Ebay score) as I did bid on this and lost out by something like a quid on the last minute. As luck would have it the winner bailed out and I was offered this at the bidding price that I put forward originally. Of course I said yes.
Recorded back in 1979 this didn't see the light of day until 1996 when it was finally unearthed and released. 1000 were pressed on a nice white colour. Not sure of the other pressing info.
It's a strange record alright when you read the notes on the history of this recording. They basically recorded it in someone's house but in different spots and the singer ended up in the yard. Many tout this as their finest recording but as great as this is, it will always be 'Rock for light' for me. I'm glad I finally got this. It's been on my wants list for a while now and although it was by far the most expensive record from that batch I did get it for a decent price compared to how much it usually goes for.
Posted by Mark-Sandwell at 23:38 No comments: