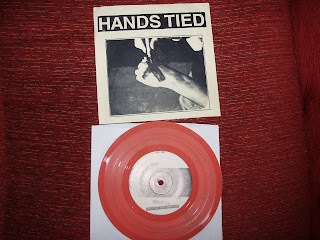 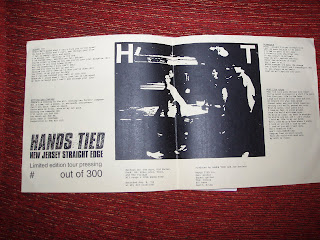 Nice to track down a copy of this niggly longtime want of mine. One of those records that I always seemed to get beaten to the post with on eGay. So a copy came up for set sale and I decided to treat myself. Hands tied was the band that came after Mouthpiece yet only had a small release output (along with a much later released 7" of old recordings). I remember going to see them in Birmingham 1998 where they played with Ten yard fight. Was quite a memorable evening not because of the actual show (which was good but not mindblowing, maybe because it was on a Sunday night and people were saving their energy to the following mudane Monday morning) but because I met the infamous character in UKHC at the time, Squashead and because I went back to Manchester and watched Stone cold Steve Austin win the royal rumble in the small hours of the next day.
I'm a fan of bands ripping off sleeves of classic records (although it has been done to death admitably) and this is a great job. They done the Project X 7" justice even to the inner sleeve. 300 of these were pressed on this nice colour of vinyl.
Posted by Mark-Sandwell at 05:54